Something dark is brewing at Warner Bros. Studio Tour London – The Making of Harry Potter as fans get the chance to follow the Dark Mark during the popular Dark Arts feature this October.

From Friday 24th September to Sunday 7th November 2021, the Dark Arts feature will focus on the symbol of Lord Voldemort and his Death Eaters as the Dark Mark is projected throughout the Studio Tour for fans to follow on their visit.

Between the imposing trees of the Forbidden Forest or the turrets of the Hogwarts Castle model, visitors can collect a Studio Tour passport on arrival and go on the hunt for the Dark Mark.

In celebration of Hallowe’en, a fan-favourite returning this year will be the ceiling of floating pumpkins in the magnificent Great Hall, as seen in Harry Potter and the Philosopher’s Stone. Each uniquely carved pumpkin was hand-crafted by Head Propmaker on the Harry Potter film series, Pierre Bohanna and his team as well as much of the Hallowe’en feast which will laden the tables of the Great Hall. 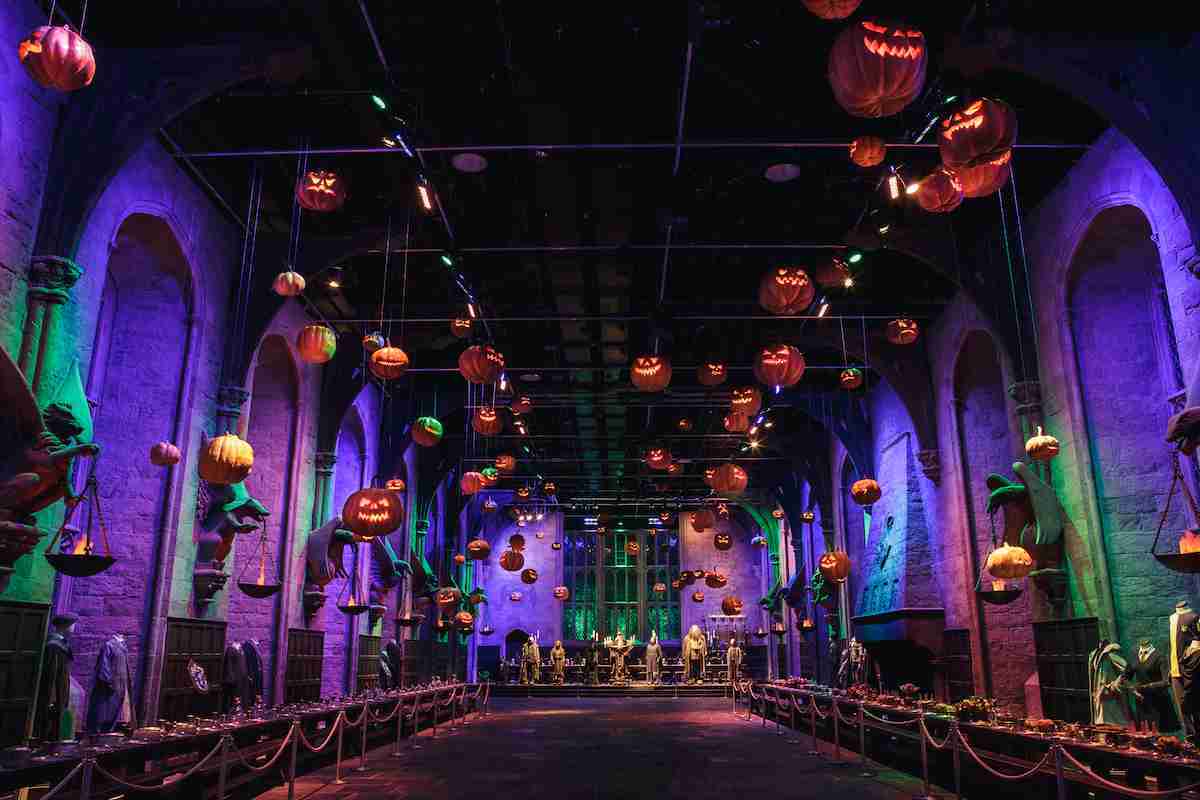 Visitors to Warner Bros. Studio Tour London – The Making of Harry Potter are also invited to learn the moves behind a wand combat scene, just like the Battle of Hogwarts, in a live duel with Death Eaters. The Wand Choreographer from Harry Potter and the Order of the Phoenix to Harry Potter and the Deathly Hallows – Part 2, Paul Harris, described the importance of wand combat as a ‘’physical element to casting a spell, because otherwise what makes one wizard better than another?’’ Fans will learn a sequence from the famous battle scene and practise their spells on Death Eaters during their visit.

Brave guests are invited to dine amongst Death Eaters as the Hogwarts After Dark events return for another year. Available on 6th, 7th and 8th October 2021, guests will start their evening with smoking dry ice cocktails and canapés before venturing into the Great Hall, decorated with 100 floating pumpkins. All new for 2021, guests will enjoy a delicious two-course dinner amongst the popular interior sets of the Studio Tour including the Potions classroom and Dumbledore’s office. The lights will be dimmed and the music more foreboding as the Studio Tour will be patrolled by Death Eaters during the spooky evening.

After finishing their meal, guests will grab a lantern and follow the spiders into the Forbidden Forest where dessert will be served amongst the imposing trees and creatures found in the out of bounds section of Hogwarts. Throughout the evening, guests will duel with Death Eaters and learn about movie magic such as creating troll snot and unicorn blood from the iconic movie scenes.

The Studio Tour’s Dark Arts feature will run from Friday 24th September – Sunday 7th November. Tickets must be pre-booked, and all Dark Arts additions are included in the ticket price.