Summer is finally here, the sun is shining, and football might be coming home, but that shouldn’t stop a good movie night!

To help with that perfect summer movie night pick we’ve rounded up a selection of our favourite recent blockbuster 4K Ultra HD Home Entertainment releases to help give you a little movie night inspiration. 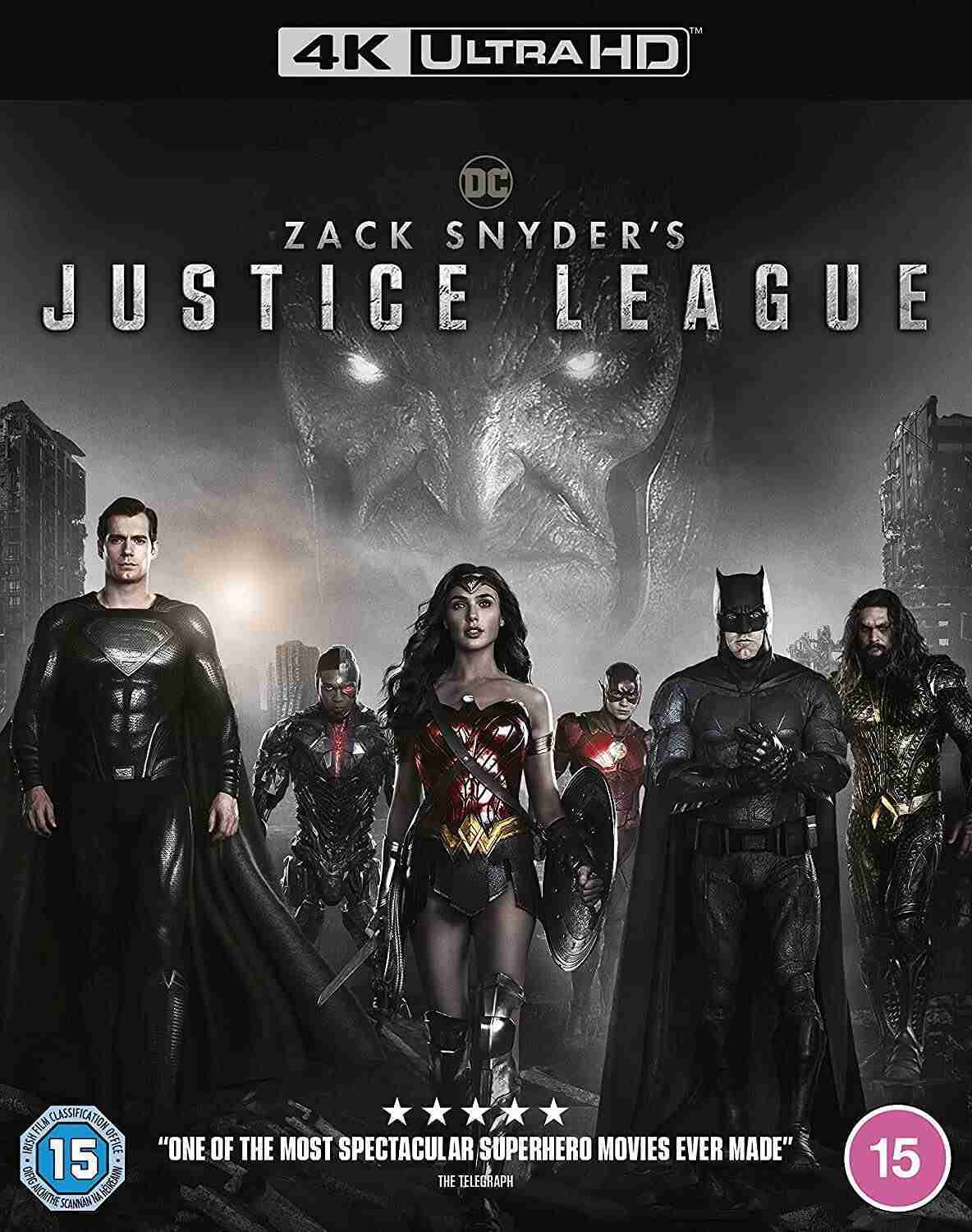 If it is blockbuster entertainment you are after, then look no further than ZACK SNYDER’S JUSTICE LEAGUE, the epic new director’s cut of 2017’s underwhelming Justice League.

When Snyder sadly had to step down from production on Justice League due to the tragic passing of his daughter Autumn, Joss Whedon was brought in to complete the film. Despite being an uncredited director – with Snyder retaining sole directorial credit – Whedon radically altered Snyder’s original vision, slashing the intended running time, reshooting almost the entire film, adding in new script elements (almost 80 pages!) and incorporating lighter and more humorous aspects. In fact, it is estimated that Whedon’s theatrical cut used just 10% of the footage that Snyder originally shot.

Presented in an unusual 4:3 format (“to preserve the integrity of Zack Snyder’s creative vision,” an opening message informs us) and clocking in at just over four hours, doubling the length of Justice League, Snyder’s version is vastly superior in every way imaginable, adding a greater sense of direction, fleshing out the plot and character depth (with significant new back stories and improved world building elements), and darkening the overall tone. Interestingly, Snyder’s cut does not include any scenes shot by Whedon for the theatrical version.

The square 4:3 format is a strange choice as it can often feel a bit restrictive, whereas a big, widescreen presentation would add even greater scope to what is quite frankly an enormous film, however, the 4K Ultra HD release looks and sounds as good as you would expect thanks to a native 4K HDR presentation and a thundering Dolby Atmos soundtrack, doing full justice to Tom Holkenborg’s towering score – a mammoth fifty-four track, three hour and 54 minute long masterpiece that set a new record for the longest musical score in film history.

If you can get past the lengthy run time, ZACK SNYDER’S JUSTICE LEAGUE is real blockbuster entertainment for your summer movie night. Just make sure you top up the drinks and popcorn – you’ll need a lot!

Zack Snyder’s Justice League is dedicated to the memory of Autumn. 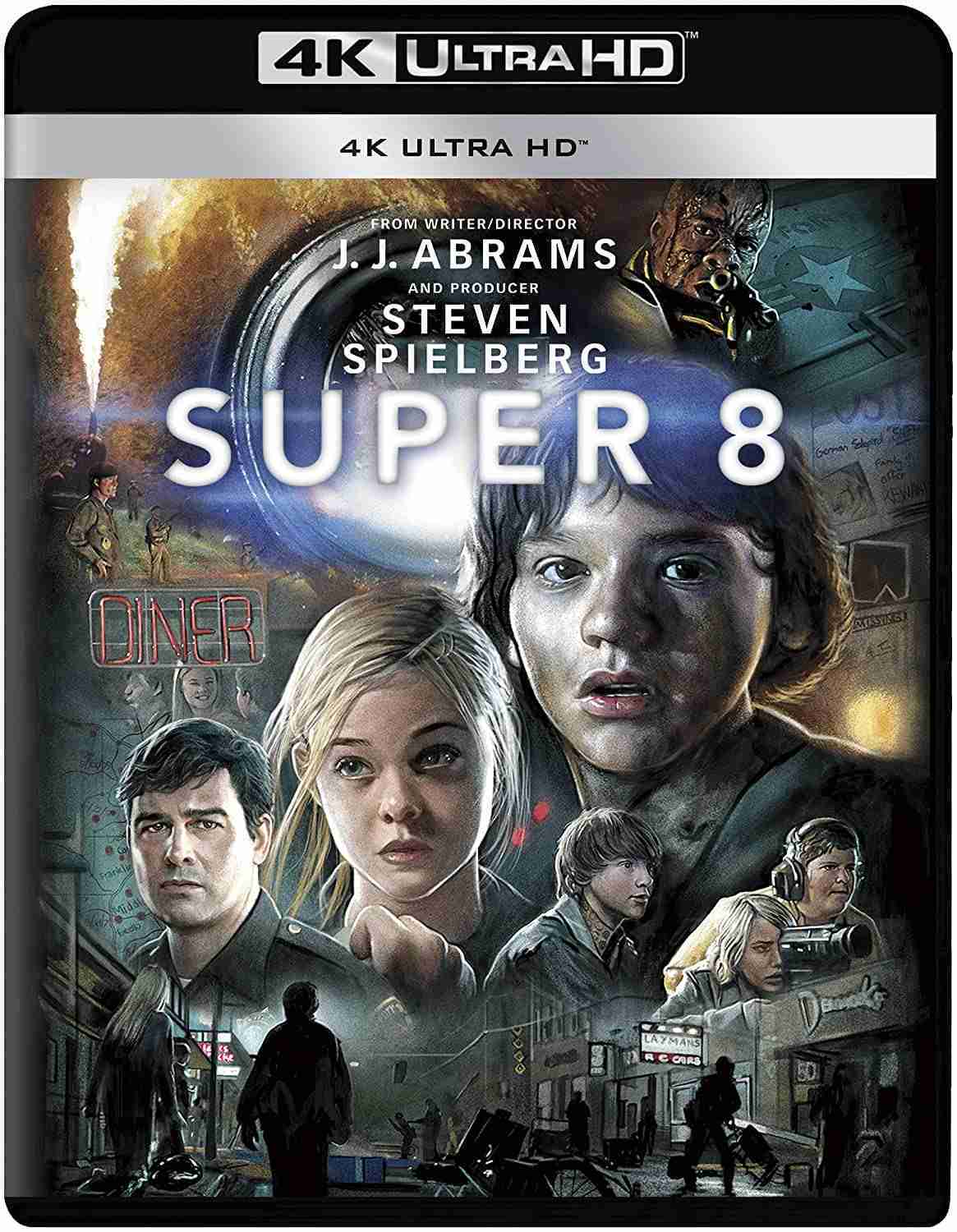 Written and directed by J. J. Abrams and co-produced by Steven Spielberg, this dark and nostalgic sci-fi-mystery-thriller became an instant modern classic when it was first released back in 2011, bringing to mind the likes of E.T. and The Goonies – amongst other thematically similar coming-of-age adventures – and now arrives on 4K Ultra HD for the very first time in the UK to coincide with the film’s 10th anniversary.

SUPER 8 tells the story of six friends who witness a train wreck while making a Super 8 movie, only to learn that something unimaginable escaped during the crash. They soon discover that the only thing more mysterious than what it is, is what it wants.

Boasting a gripping, nostalgia-packed plot, dazzling effects, excellent performances and a superb Michael Giacchino score, SUPER 8 is an ideal choice for your summer family movie night, and if you’re a fan of 80s Spielberg and are discovering this imaginative gem for the first time, then you are certainly in for a treat! 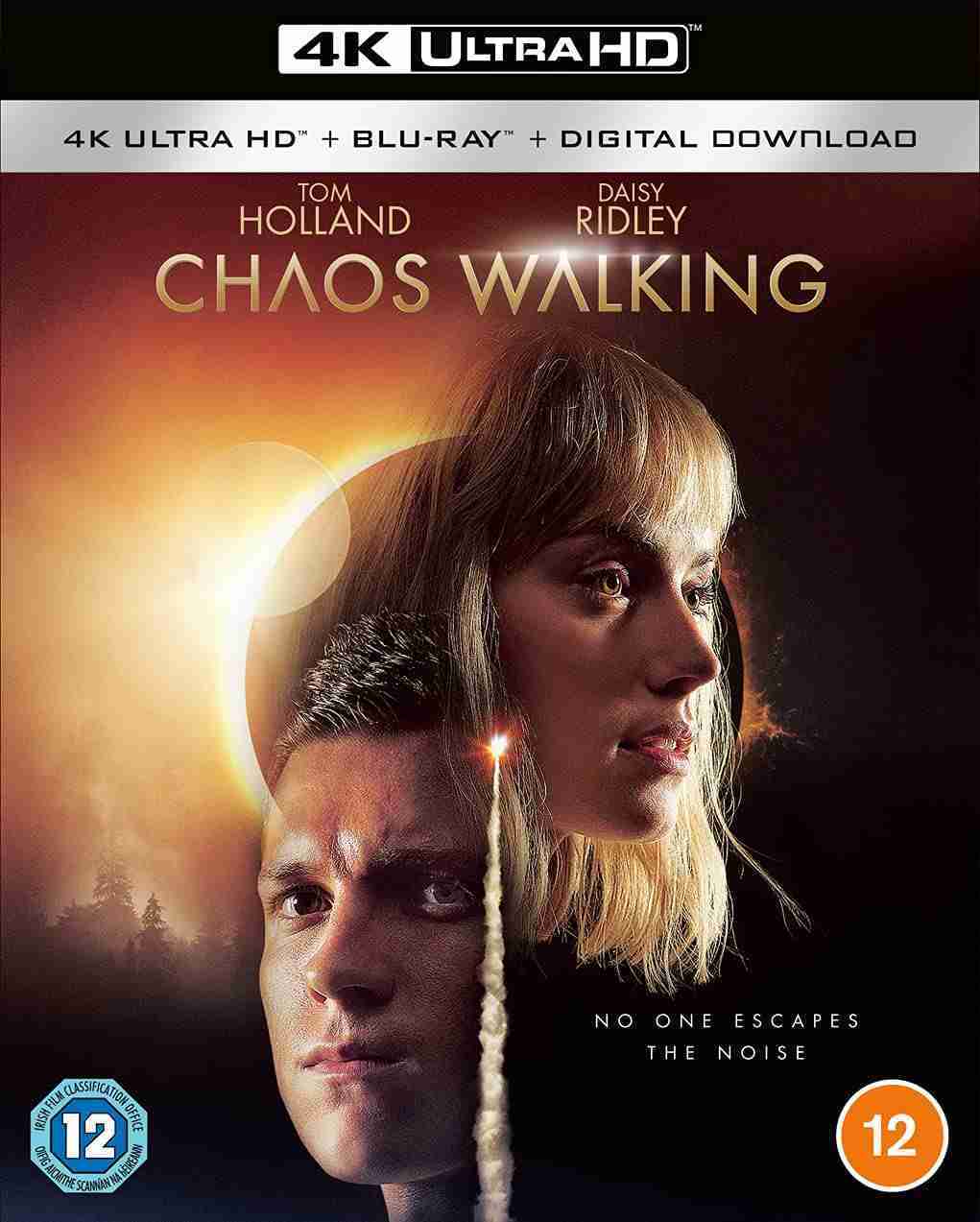 Adapted from Patrick Ness’s 2008 young-adult sci-fi novel, The Knife of Never Letting Go, the first book in Ness’s Chaos Walking trilogy, CHAOS WALKING is an intriguing sci-fi action-thriller set in a dystopian future on the colonised planet ‘New World,’ where women have disappeared and all men have been afflicted by ‘The Noise,’ a condition which causes everyone to see and hear each other’s thoughts.

When a mysterious woman (Daisy Ridley) crash-lands on the planet, a young man (Tom Holland) must protect her and help her escape the dangerous landscape as he attempts to unlock the planet’s dark secrets.

Despite its compelling premise, strong production design and a solid cast, CHAOS WALKING unfortunately never quite fulfils its potential, and is often let down by pacing issues and a general lack of true story and character development.

That said however, CHAOS WALKING is an interesting film, there is certainly lots to admire, and the 4K Ultra HD looks and sounds exceptional thanks to a native 4K presentation (in 2.39:1) and a great Dolby Atmos soundtrack.

The film definitely won’t be for everyone but it is an entertaining enough popcorn flick and will make an interesting choice for movie night, with plenty to discuss and debate afterwards! 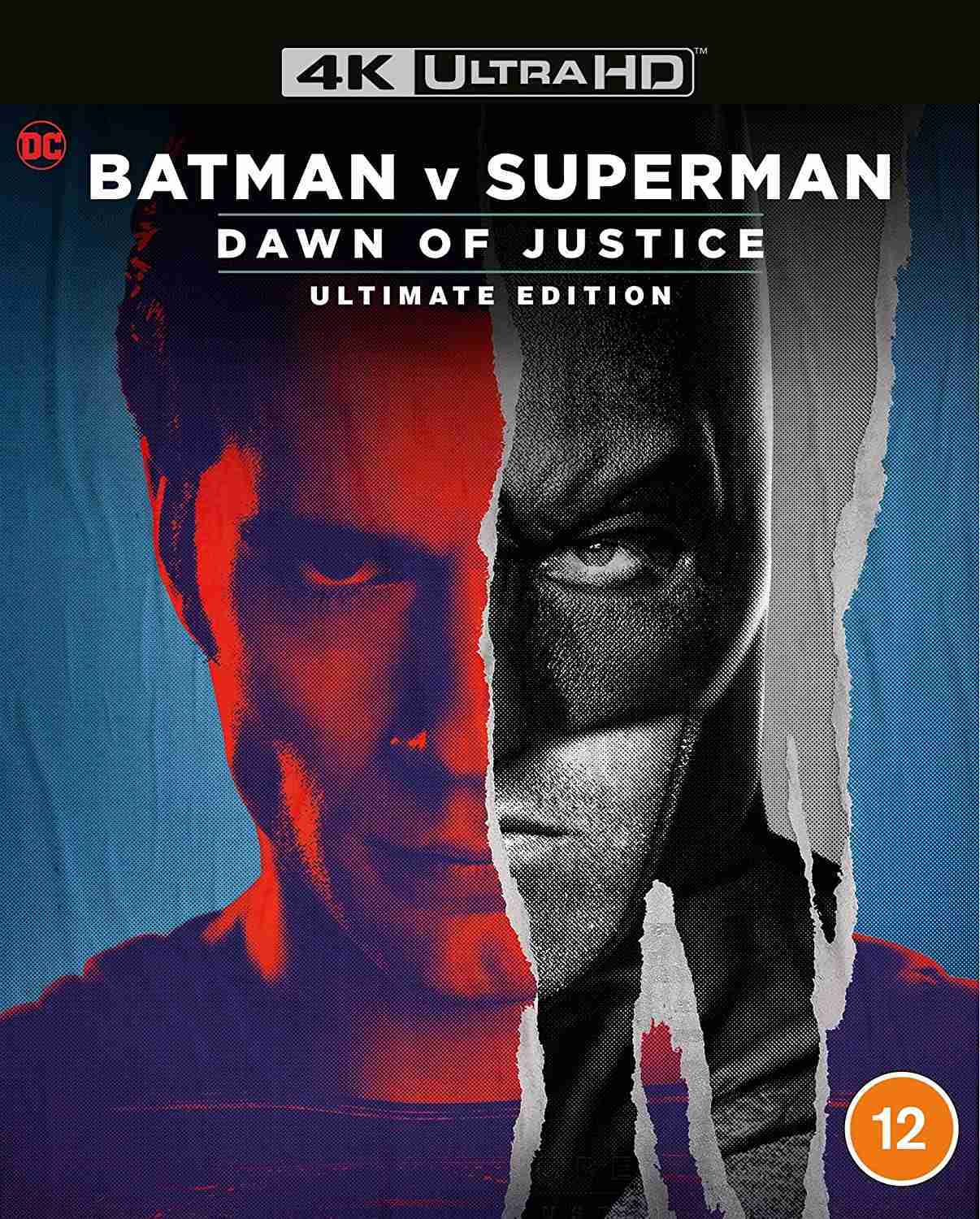 In 2013, Zack Snyder kick-started the DC Extended Universe (DC’s answer to the blockbuster Marvel Cinematic Universe, or MCU) with Man of Steel, a big-budget reboot of the Superman film series, and the first since Superman Returns (2006), starring Henry Cavill in the title role.

Snyder then followed Man of Steel with 2016’s Batman v Superman: Dawn of Justice, the second instalment in the DC Extended Universe, a direct prequel to Zack Snyder’s Justice League, and most notably, the first live-action film to feature Batman and Superman together.

Fearing the actions of a god-like Super Hero left unchecked, Gotham City’s own formidable, forceful vigilante takes on Metropolis’s most revered, modern-day savior, while the world wrestles with what sort of hero it really needs. And with Batman and Superman at war with one another, a new threat quickly arises, putting mankind in greater danger than it’s ever known before.

Warner’s 4K UHD only Ultimate Edition (no standard Blu-ray Disc is included in the set), now newly remastered with enhanced colour and expanded 1.43:1 picture aspect ratio for the big, IMAX-filmed sequences (which were previously cropped for the original home ent presentations), offers a consistently solid native 4K presentation, with HDR, and an epic, Dolby Atmos-True HD presentation, making it an ideal showcase for your home cinema setup.

Elsewhere, there have been a host of other new 4K Ultra HD remasters including a staggeringly beautiful new edition of the iconic 1964 Academy Award Best Picture winner, MY FAIR LADY, starring Audrey Hepburn as Eliza Doolittle and an OSCAR-winning Rex Harrison as Henry Higgins, which makes its debut on 4K with a truly jaw dropping new presentation, restored from 8K scans of the original 65mm elements, and a flawless 96K resolution 7.1 Dolby TrueHD lossless soundtrack, making it a genuine must have!

Tim Burton’s 2003 fantasy-comedy-drama BIG FISH may not be one of the director’s best known films, but it’s certainly one of his finest, and it now makes a welcome debut on 4K in a glorious new UHD release. Burton’s joyous and superbly crafted ensemble film, based on the 1998 novel of the same name by Daniel Wallace, boasts exquisite native 4K HDR10 video and a new and improved Dolby Atmos (Dolby TrueHD 7.1 compatible) soundtrack, making it a hugely enjoyable and absolutely essential 4K upgrade.