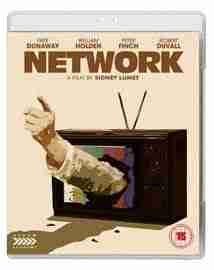 Featuring a powerhouse cast list including Peter Finch, Faye Dunaway, Robert Duvall, William Holden and Warren Beatty, the four times Academy Award winning film, which also won a handful on Golden Globes and BAFTAs on release, will arrive on Blu-ray for the first time in the UK from 23rd March 2015.

This new and fresh edition features an exciting array of extra features including an hour-long documentary The Directors, focussing on Sidney Lumet, alongside an all-new visual essay on the film’s making, written and presented by Dave Itzkoff (author of Mad as Hell: The Making of Network and the Fateful Vision of the Angriest Man in Movies).

The reversible sleeve will showcase both the original and the newly commissioned artwork by Chris Walker and the disc will also feature a collector’s booklet with new writing on the film by Mike Sutton and an American Cinematographer article by director of photography Owen Roizman, illustrated with original stills and artwork.

I WILL BE RETIRING FROM THIS PROGRAMME IN TWO WEEKS’ TIME BECAUSE OF POOR RATINGS.

In 1976 two of the key players in the Golden Age of Television, writer Paddy Chayefsky and director Sidney Lumet, delivered a coruscating attack – at once savage and hilarious – on the medium that made their names.

SINCE THIS SHOW WAS THE ONLY THING I HAD GOING FOR ME IN MY LIFE, I’VE DECIDED TO KILL MYSELF.

To speak Chayefsky’s Oscar-winning dialogue, Lumet enlisted a powerhouse cast list, including Faye Dunaway, William Holden, Peter Finch (as ‘the mad prophet of the airwaves’ Howard Beale), Robert Duvall, Ned Beatty and Beatrice Straight. Five of them would be nominated for Academy Awards, three would win.

I’M GOING TO BLOW MY BRAINS OUT RIGHT ON THIS PROGRAMME A WEEK FROM TODAY.

As well as its four Oscars, Network was also garlanded with a quartet of Golden Globes, a BAFTA and numerous other awards. In the years since its release, its reputation has only grown: the Library of Congress granted it a place on their prestigious National Film Registry; the American Film Institute named it as one of the greatest American films of all time; and the Writers Guild of America declared its screenplay one of the ten best of all time. It remains a true classic.

SO TUNE IN NEXT TUESDAY.

·         Optional English subtitles for the deaf and hard of hearing

·         The Directors: Sidney Lumet – a 1999 documentary on the director, containing interviews with Jack Lemmon, Rod Steiger, Christopher Walken and others

·         Tune in Next Tuesday – a visual essay by Dave Itzkoff, the author of Mad as Hell: The Making of Network and the Fateful Vision of the Angriest Man in Movies

·         Collector’s booklet featuring new writing on the film by Mike Sutton and an American Cinematographer article by director of photography Owen Roizman, illustrated with original stills and artwork