The Killing of a Chinese Bookie (Blu-ray) (BFI) 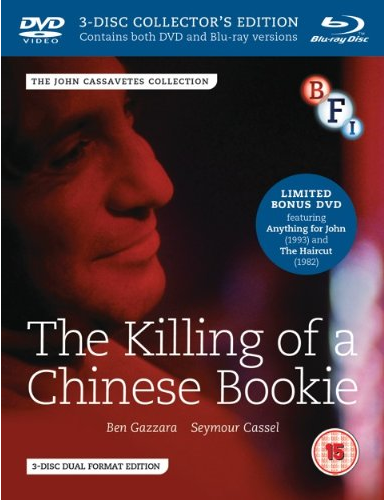 Though a commercial failure upon its original release in the February of 1976 (with the film subsequently being pulled from distribution after only seven days), John Cassavetes’ gritty, absorbing and ultra-realistic art house-crime drama has since gone on to be considered one of his finest, most authentic and most acclaimed works, and this superb new release from the BFI, the fifth and final title in their ‘John Cassavetes Collection’, presents both the original ‘uncut’ 1976 version (which star, Ben Gazzara claimed he hated due to the length), and the shorter 1978 version, re-edited by Cassavetes’ for the 1978 commercial release.

“Set in Los Angeles, California, Cassavetes regular Ben Gazzara stars as the seedy small-time ‘Sunset Strip’ entrepreneur Cosmo Vitelli, owner of the Crazy Horse West night spot. An obsessive showman, Cosmo navigates a murky world of loan sharks and crooks to keep his club afloat, but, when a gambling debt spirals out of control, he is blackmailed into accepting a murderous commission to wipe out the debt and clear his name.”

Undoubtedly one of the most complex and plot driven of all his works, Cassavetes’ smooth and fluid directorial style effectively contrasts with the gritty ‘post-noir’ realism of the plot, and the sharp, often improvised dialogue, to evoke a more potent and more effective exploration of the darker and more shadowy aspects of the ‘American Dream’.

In true Cassavetes’ style, the film ultimately remains quite an ambiguous and enigmatic piece, with significant plot details and devices never fully revealed or explored, constantly questioning and challenging the audience and leaving them to speculate and deduce their own theories and ideas.

The vastly underrated Ben Gazzara delivers an absorbing performance of great skill and charisma in the film’s central role of the fairly resigned strip club owner, Cosmo, and he receives stand out support from the fine pairing of Seymour Cassel and Timothy Agoglia Carey as Mort Weil and Flo, the constraining underworld gangsters out to defraud our afflicted protagonist.

Utilising the elegant, yet deep and consuming cinematography of regular collaborator, and frequent producer, Al Ruban, here alongside fellow cinematographer, Mitchell Breit, ‘The Killing of a Chinese Bookie’ proves a rough and audacious work of great skill, style and sophistication, and employing a reliable cast and crew of regular collaborators, the film remains one of the finest and most striking achievements in Cassavates’ esteemed filmography.

The films were transferred in High Definition on a Spirit Datacine from a 35mm colour reversal internegative. Thousand of instances of dirt, debris, and scratches were removed using the MTI Digital Restoration System.

The image can appear soft and slightly thick or waxy at times, but is generally quite pleasing, delivering rich, vibrant colours, deep blacks, and some good depth, fine detail and fluidity, enhancing both the gritty, realistic textures and the authentic filmic qualities of the piece with a nice layer of natural film grain.

Perhaps not the strongest looking presentation in the BFI’s Cassavetes blu-ray collection, but still an impressive transfer, and the finest the film has looked for quite some time!

Dynamic range is limited, however, the English LPCM Mono 2.0 Audio is clean, and in great condition, with no significant signs of any age related artefacts or debris.

Presented in both High Definition and Standard Definition

Biography of Tamar Simon Hoffs (PDF on bonus DVD only)

One of the director’s finest and most plot driven, and most engrossing works is finally given the blu-ray treatment courtesy of BFI, and given the amount of exclusive extras on offer, this Limited 3-Disc Collector’s Edition set (strictly limited to just 1,000 units) really is an absolutely essential ‘must-have’ for any Cassavetes or just general cinema enthusiast!