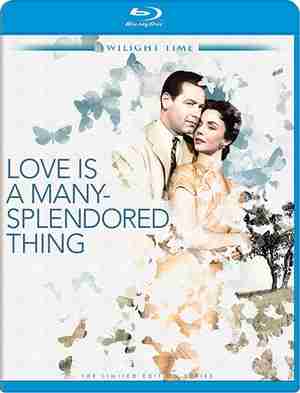 Love Is a Many-Splendored Thing

The simplistic yet highly effective storyline depicts the poignant tale of the reserved and widowed Eurasian doctor Han Suyin (Jennifer Jones), working in the exotic, conflict-ridden Hong Kong of the post-World War II era (during the period of China’s Civil War in the late 1940s). Once there, she meets and falls in love with the handsome, married-but-separated American war correspondent Mark Elliott, and as the two quickly embark on a whirlwind romance together (against her own initial reluctance), she finds herself shunned by the elder Chinese community and consumed in a wave of racial, political and military turmoil.

Academy Award-winners Jennifer Jones (Best Actress in a Leading Role – The Song of Bernadette‘ – 1943) and William Holden (Best Actor in a Leading Role – ‘Stalag 17’ – 1953) are both excellent in the central roles (with Jones receiving a nomination for Best Actress in a Leading Role for her performance), displaying excellent levels of sensitivity and chemistry, and effectively accentuating the profound and wholly relatable emotions of the piece (which is very surprising considering they could barely stand each other on set, with Holden stating that Jones was generally rude and abrasive to everyone involved in the production and complained bitterly throughout).

The supporting cast of lesser known, yet recognisable faces are equally as strong, with particularly impressive performances from Torin Thatcher and Isobel Elsom.

Twilight Time’s AVC encoded 1080p High Definition presentation, in the original aspect ratio of 2.55:1, delivers truly stunning results and is undoubtedly one of, if not their finest Fox licensed titles to date.

Colours are gorgeous and beautifully saturated, really enhancing the rich blue and green hues of the generally warm colour palette; contrast levels are excellent and levels of crisp definition and fine detail are very impressive.

The only images that do appear slightly soft are the numerous rear projection or process photography effects utilised without the film, however this is down to the original production and by no means a fault of the presentation.

The image is beautifully clean, with no noticeable signs of age debris or age related damage, and the image thankfully retains a wonderfully authentic filmic quality, with a nice layer of natural grain present throughout.

In terms of visual and audio quality this is near enough as good as the film is going to get, and this limited edition blu-ray release proves another stunning, must-have release from Twilight Time! Very highly recommended!