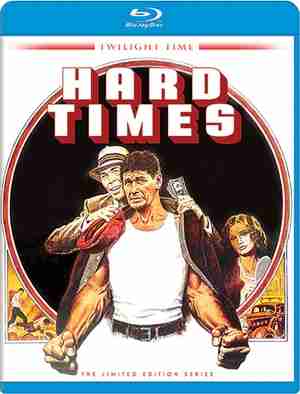 Though having directed such cinematic gems as ‘The Driver’ (1978) (inspired by Jean-Pierre Melville’s ‘Le Samouraï’), the 1979 cult-classic ‘The Warriors’, the sweeping, painterly, 1980 western, ‘The Long Riders’, and the 1981 action-thriller, ‘Southern Comfort’ (arguably his finest achievement), as well as co-producing the entire ‘Alien’ series (including ‘Prometheus’), Walter Hill is often greatly overlooked when we consider the great contemporary American filmmakers, however this superb new World Premiere blu-ray release from Twilight Time gives viewers a perfect opportunity to witness the powerful, hard-hitting directorial debut from a man considered by many to be one of the most influential filmmakers of the 1970’s and 80’s.

Set in Depression-era New Orleans, the film follows the travails of the tactful, esoteric, down on his luck drifter, and street fighter, Chaney (Charles Bronson), who, joining forces with the fast-talking, Spencer “Speed” Weed (James Coburn), a promoter of no-holds-barred street boxing bouts, and the drug-addicted, medical-school dropout turned ‘cut-man’, ‘Poe’ (Strother Martin) sets out to make some hard-earned cash in the illegal bare-kncukle fight game.

In terms of plot, substance and gripping narrative structure, there isn’t really a great deal to Hill’s debut feature aside from the main plot-line, however though this is the case, it nevertheless proves a compelling, highly-entertaining and immersive piece of cinema, beautifully and vividly recreating and evoking the period in which it is set, and giving us welcome early glimpses of the astute directorial vision and style that would define Hill’s later, more well known works.

In-keeping with the majority of his future, male-dominated films, the central pairing of Bronson and Coburn proves very effective indeed, with both delivering excellent performances in their respective roles of the laconic, taciturn, protagonist, ‘Chaney’ (a character profile that would prove significant in a great deal of Hill’s future works), and the completely contrasting, fast-talking manager, ‘Speed’.

The mysterious and almost reclusive persona that Chaney embodies could ultimately prove a bit of a failure, being too far withdrawn and detached for the audience to really connect and sympathise (or empathise) with the character, however, Bronson’s powerful central performances, combined with Hill’s keen directorial eye ensures that this is not the case, and Chaney proves a compelling protagonist (with the enigmatic quality ultimately working in the characters favour).

The supporting cast are equally as strong, and there are fine performances from Strother Martin, as the aforementioned ‘Poe’, and Jill Ireland as ‘Lucy Simpson’, the lonely, despondent wife of an imprisoned husband with whom Chaney begins an uneasy romantic affair (though, in-keeping with the male-dominant emphasis of Hill’s work, and perhaps at the risk of overshadowing the central story, the potential of this particular strand is not quite realised to the full).

Though the colour palette is generally quite dark, with an emphasis on brown and greyish hues, the colours are nevertheless rich, warm, accurate and beautifully saturated. Aside from a few minor instances of image softness in a couple of the wider or longer shots, clarity and definition are both pretty outstanding, with superb levels of fine detail, sharpness and image depth, adding to the striking, consuming tone of the piece. Contrast is also excellent, with sharp whites and deep, inky blacks, and there is a significant amount of natural grain present, enhancing the authentic, filmic quality of the presentation.

Though the original mono has been expanded for the 5.1 DTS-HD Master Audio surround mix, the audio presentation never sounds processed or obviously artificial (as is often the case), delivering excellent levels of crisp, well-modulated dialogue; snappy effects; and a wide amount of dynamic range, perhaps most significantly during the raucous, crowd-heavy fight scenes.

Beautifully restored and presented on this superb new limited edition blu-ray, this proves another highly recommended release from Twilight Time.