Welcome to the very first instalment in our brand new interview series, MAKING THE MAGIC HAPPEN.

We are thrilled to be kicking off the series with a legend of Special Make-up Effects, HOWARD BERGER.

Winner of the Academy Award for Best Achievement in Makeup for The Chronicles of Narnia: The Lion, the Witch and the Wardrobe (2005), shared with Tami Lane, nominated for the Academy Award for Best Achievement in Makeup and Hairstyling for Hitchcock (2012), shared with Peter Montagna and Martin Samuel, and winner of the Emmy for Outstanding Prosthetic Makeup for a Series, Miniseries, Movie or a Special for The Walking Dead (2010), HOWARD BERGER has more than 200 film and television credits to his name, including the likes of Once Upon a Time… in Hollywood (2019), The Hills Have Eyes (2006), Breaking Bad (2011-12), Alita: Battle Angel (2019), and The Orville (2017-2022).

Howard has recently been on the road promoting his new book MASTERS OF MAKE-UP EFFECTS: A CENTURY OF PRACTICAL MAGIC, co-written with film critic and broadcaster Marshall Julius. Featuring a foreword by Guillermo del Toro, an afterword by Seth MacFarlane, and contributions from more than 50 make-up effects legends and iconic actors including, the book is a celebration of make-up artists and acclaimed make-up effects from the world of film and television.

1. What are your favourite career moments to date, or favourite films you have worked on?

My favourite film I have worked on is THE CHRONICLES OF NARNIA: THE LION THE WITCH AND THE WARDROBE. Not because I won an Oscar for it, but it was truly the most fun and the highest adventure I had ever had on a film. We submerged ourselves into the world of Narnia for almost 2 years and the experience paralleled the story. We went in as humans, became the kings of Narnia, and in the end, we were all heartbroken to leave… until the next adventure.

Other films I love are ARMY OF DARKNESS, HITCHCOCK, FROM DUSK TILL DAWN, OZ THE GREAT AND POWERFUL. All great experiences.

2. How did you get started in the industry?

I grew up in Los Angeles and my father was in the film industry as a post-production sound editor. He loved film and I caught the bug early in my life. I loved monsters and movies and understood there were people whose jobs were to make them, so I wanted to be one of them. It is about loving monsters as they were my friends.

3. What was the movie that made you fall in love with cinema?

When we were growing up, we had a screening room in our garage my father built. It had two 35mm projectors, so he was serious about film. He was friends with distributors at all the studios so we would see first run movies at the house every Sunday and the entire neighborhood would be invited. It was Movie Night and I had it all my life growing up. I thought everyone had a screening room when I was young, only to find out how special it was. Seeing movies every weekend made me fall deeper and deeper in love with film and all types.

4. What are some essential films for anyone wanting to start a career in your field?

I have a huge list of films that I think are must sees as a film fan, but regarding my field I’d say these are the ones I suggest being on your radar: AN AMERICAN WEREWOLF IN LONDON, THE THING, THE HUNCHBACK OF NOTRE DAME (1939), LITTLE BIG MAN, MAN OF A THOUSAND FACES, LEGEND, AMADEUS, PLANET OF THE APES (1968), and THE LIST OF ADRIAN MESSENGER. There are many more, but these are good starts.

The cool thing is, these are all films that strongly influenced me and still do, and are featured in my book. They are the basis of what I love and grew up on and I wanted to make sure they were covered in the book as my point of reference.

5. Can you tell us a little bit about your creative process? How do you get started on a project?

I always start by reading the script and then talking to the director to see what their point of reference might be. Sometimes I can pick up a quick language with a director, a shorthand, so that makes things much easier. It’s more difficult when they say, “I’ll know it when I see it,” which means, to me, “I have zero ideas.” From there I will brainstorm with the creatives at KNB EFX, the studio I own with Greg Nicotero these past 35 years. The team at the shop all have great minds and I love hearing their takes. From there we will do a series concept art and see if we hit anything with the director and production.

6. What’s a guilty pleasure movie you won’t switch off if it’s on TV?

HA, that’s a good one! DEEP BLUE SEA is one film as it’s soooooooo bad I can’t stop watching it if it’s on TV. Series wise, I love THE OFFICE, FRIENDS and SEINFELD. I can watch those shows 24/7. Oh, and any cooking show with the great Gordon Ramsey!

7. Can you tell us a little about your upcoming projects?

We recently finished the final season of the original THE WALKING DEAD. Those shows are all Greg Nicotero. He is the King of the Zombies and has created, along with the amazing artists at KNB, a brand unlike anything else. He’s been so dedicated to the creativity of that show for the last 12 years and he’s really made a mark on the history of TV.

I ran the new AMC series INTERVIEW WITH THE VAMPIRE. I am very proud of this show as it is a re-telling of the books, not the film, let’s be clear on that as people don’t know there are books… and when I bring it up they ask if it’s a remake of the film. It’s about the books and our producer and showrunner, Rolin Jones, has taken these great books and created a wonderful, sexy, and violent universe I think the audience will love.

Also, we have THE ORVILLE: NEW HORIZONS streaming these days. This is season 3, and we ran all 3 seasons, which was a lot of hard work but so great to work with Seth MacFarlane, who is a super genius and so creative. If he trusts you, he lets you run with things, as he did us. It was a very rewarding experience.

Lastly, I just finished the new Disney+ series THE SANTA CLAUSES with Tim Allen. We created and executed the Santa makeup on Tim and all the elves. Tim was the BEST. I love that guy! Such a pleasure and so much fun. I would love to do something else with him as I respect the hell out of him, so professional and funny. As you can see, I’m a bit Tim Allen fan!

8. How do you switch off from work? What are your hobbies?

I have heaps of other hobbies and interests. My wife Mirjam and I stay creative and busy all the time. I am never bored. I am big on photography and I am always shooting, be it on set, in the shop, on location or vacation. I love shooting and now I have switched back to actual film, shooting medium format and the photos are turning out beautiful and unique. Great shop stuff of the guys working! I love film as it captures that moment and you hope it turns out. It’s a bit of a crap shoot, so if you know your stuff you will have success. And I have a few cameras, so I like to mix it up and see what I get.

I also enjoy gardening. During the pandemic shut down, I planted heaps of succulents and now they are all massive and ready to get re-planted into the garden, so I am excited.

Also, during the pandemic is when Marshall Julius contacted me about writing the book, and this time I had no excuse as I was not going to work for the next 6 months, nor was anyone else, so it worked out perfectly. That was heaps of fun as we interviewed close to 70 artists in the industry to write MASTERS OF MAKEUP EFFECTS, which was a complete blast.

9. What’s one piece of advice you wish you’d been given when you were first starting out in the industry?

Don’t worry so much as it always works out and there is always a way.

10. If you had to submit a ballot for the Sight and Sound Greatest Films of All Time poll, what are some films that would be on your Top 10 list? 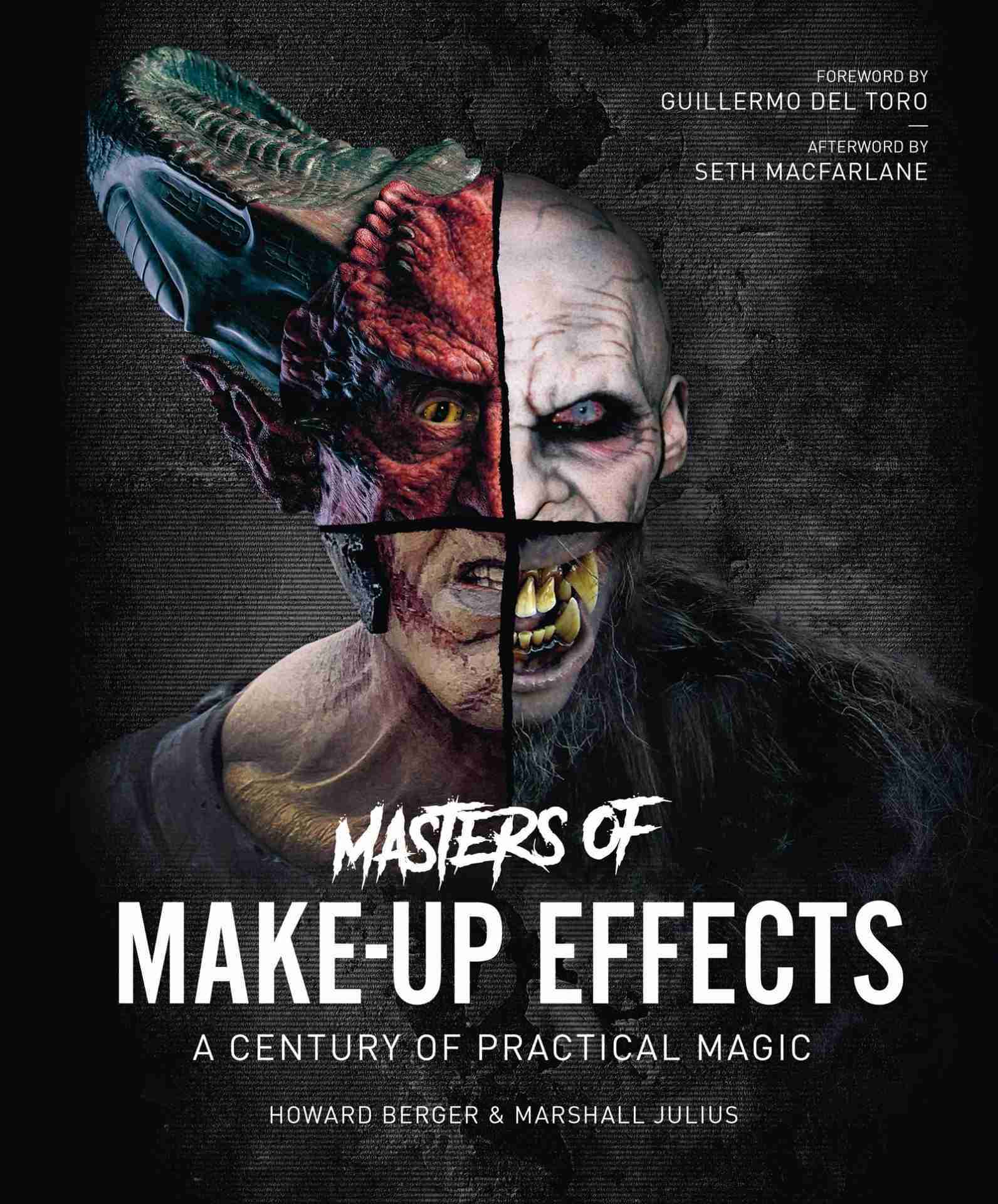