Back in 1986, eager cinephiles flocked to cinemas and saw things on the screen that they hadn’t really seen before, or maybe not on that scale. They were captivated by the exhilarating aerial footage and swept up in its testosterone-fueled tale of machismo and striving to be the best.

It fueled a huge surge in navy recruits, so much so that in some US movie theatres, recruitment booths were even set up to attract hyped-up fans. It was the epitome of 80s cool; the bomber jackets, the aviators, the jets. The film catapulted its young star Tom Cruise to superstardom as the hotshot young naval aviator Pete “Maverick” Mitchell, and its influence in pop culture has never really faded.

Thirty-six years on, Cruise now returns to his iconic role in the epic, box-office juggernaut, Top Gun: Maverick, an intense, immersive and surprisingly moving sequel that many fans thought they may never see happen.

Director Joseph Kosinski has an impressive track-record with sequels to influential cult classics having directed 2010’s Tron sequel, Tron: Legacy, and now delivers a thrilling, fan-pleasing follow-up that gives Top Gun fans everything they hoped for and more.

Following a stirring, haze-filled homage to the original film’s opening sequence, the film kicks off in breakneck fashion with Maverick – now working as a Test Pilot – pushing a prototype jet beyond Mach 10 to save his test program from cancellation. Shortly after he is confronted by the ghosts of his past when he brought back to Top Gun to train an elite group of graduates – including Lt. Bradshaw (Miles Teller), the son of his former wingman, Goose – for a highly specialised classified strike mission.

Key scenes are recreated with a modern twist that still feel fresh despite retaining that familiar sense of nostalgia. The echoes between past and present gel perfectly and deliver some of the most intriguing elements of the film. Just like the original, Steve Stevens’ spine-tingling guitar riff leads into Kenny Loggins’ Danger Zone as the jets launch from the catapult. The recruits are more diverse here but the character profiles remain the same. Glen Powell’s “Hangman” takes over from Val Kilmer’s “Iceman” as the cocky, arrogant hot shot. Bradshaw is the new Maverick. The homoeroticism is still there but perhaps less blatant, and the signature oiled up beach volleyball match now makes way for a slightly less oiled American football match. Ultimately, the key themes of loyalty, friendship and competition are all there, and that’s what the legacy of Top Gun was built on.

Jennifer Connelly is magnetic as Maverick’s old flame Penny, who owns the local bar where the recruits hang out, but unlike the original, there is slightly less focus here on Maverick’s rekindled romance than with Kelly McGillis’s Charlie in the original. There is some strong character development, and plenty of powerful sequences, particularly between Cruise’s Maverick and Teller’s Bradshaw, but this is all about the action and the jets, and those stimulating, made for IMAX flight sequences firmly take centre stage.

Having grossed nearly $1.5 billion at the world-wide box office, Maverick is both the highest grossing film of 2022 and the highest-grossing film of Cruise’s career – no mean feat – and it isn’t hard to see why. For Top Gun fans, it was a long, 36-year wait, made longer by the pandemic delays, but it was well worth it and Top Gun: Maverick delivers everything you would want from an epic action-packed blockbuster. 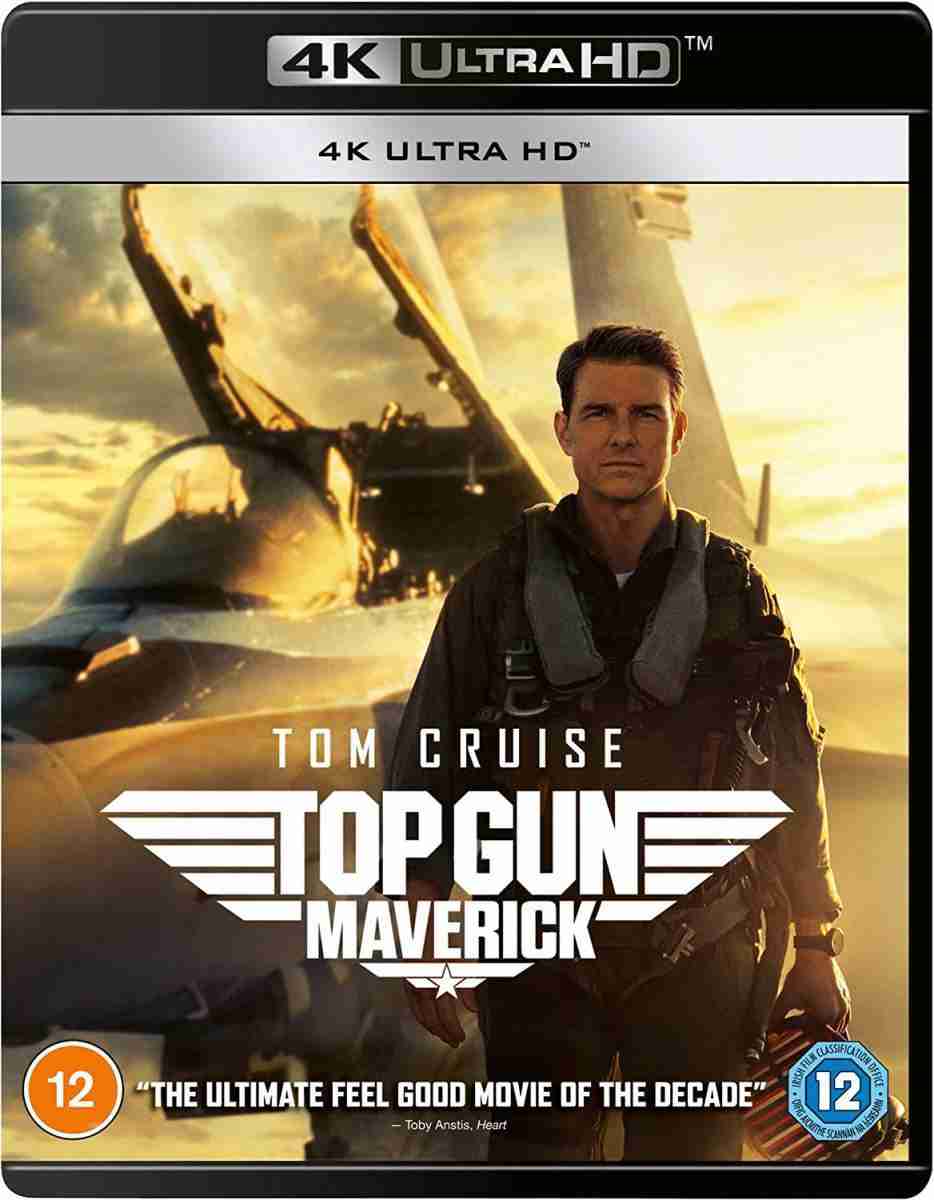 Top Gun: Maverick arrives on Ultra HD with a staggering native 4K HDR presentation boasting jaw-dropping, razor sharp visuals, gorgeous, vivid colours, and deep, inky blacks. Of course nothing can match the immersive IMAX experience, however, this is as good as home entertainment presentations get, and it proves a flawless showcase for the 4K format.

The English Dolby Atmos audio track is every bit a match for the visual presentation. The sound design is a huge part of the film and the Dolby Atmos track makes short work of the screams and roars of the blistering jet engines, the intense rattling of gunfire and the huge, sweeping score from Harold Faltermeyer, Lady Gaga, Hans Zimmer, and Lorne Balfe. It is a thundering, perfectly balanced presentation that will give your home cinema set-up a real workout.