Since bursting onto the scene with his startling debut feature Get Out back in 2017, Jordan Peele has proven himself as a filmmaker who isn’t afraid to push boundaries or do things a little differently, delivering unique and original horrors that have put him amongst the most exciting and consistent writers and directors currently working today.

Following some exec producing work on the small screen, Peele now returns to the big screen with this anticipated third feature, Nope, a thrilling fusion of the sci-fi, horror and western genres and his most expansive and ambitious work to date.

Otis Haywood Sr. (Keith David) runs a successful family business training and supplying horses for film and television productions. Following a freak incident which sees Otis Sr. fatally struck by a mysterious falling object, his son OJ (Daniel Kaluuya) and daughter Em (Keke Palmer) inherit their remote desert ranch and unexpectedly find themselves in charge of the struggling business. OJ is forced to sell some of their horses to Ricky “Jupe” Park (Steven Yeun), a former child star who owns the nearby Western theme park, Jupiter’s Claim, who informs OJ that the offer he had in place with his father to purchase the ranch still stands.

When OJ witnesses a unusual saucer like object hovering in the skies above the ranch – which seems to zap all electricity in the area, and cause the horses to vanish – they devise a plan to capture video evidence of the UFO’s existence – “The Oprah Shot” – and raise the funds to save the failing ranch, roping in tech salesman Angel (Brandon Perea) and esteemed cinematographer Antlers Holst (Michael Wincott) to assist in their ambitious quest.

Nope is a smart and intelligent take on the UFO/alien-invasion sub-genre, free from the familiar, well-trodden sci-fi tropes we’re often used to seeing. It is a film about filmmaking, about the nature of cinematic technology, and the significance and power of the camera lens. It provokes a discussion around exploitation and our need to see and be seen in a digital age obsessed with viral videos and content creation. It is a film steeped in cinematic tradition, with myriad sequences and shots paying homage to some of cinema’s all time greats.

Peele also takes the opportunity to pay tribute to a pioneering figure of the early cinematic process. In an early scene, during a horse safety briefing on a film set, Em educates the crew about Eadweard Muybridge’s photographic series, Animal Locomotion, the earliest attempt at assembling still photographs to create a moving image, and proudly states that her and OJ are descendants of the black jockey featured in the groundbreaking two-second clip. The images helped advance the scientific study of animal movement and offered a look at the world of Black jockeys in the late 19th century. The identify of the jockey is sadly unknown, though his contribution to cinemas is immeasurable.

Cinematographer Hoyte van Hoytema makes full use of the glorious locations and the IMAX format to capture the vast desert panoramas, the ominous, wide-open canvas of the California sky and highlight that real sense of Meta.

Despite its scope and the big budget effects, Nope is a much more subtle work than Peele’s previous films. The social commentaries are profound though perhaps less obvious (or less striking) and Peele draws on his influences, his understanding of film and his love of the craft to deliver an intelligent, conceptual, and often audacious blockbuster that proves as thought provoking as it does entertaining. 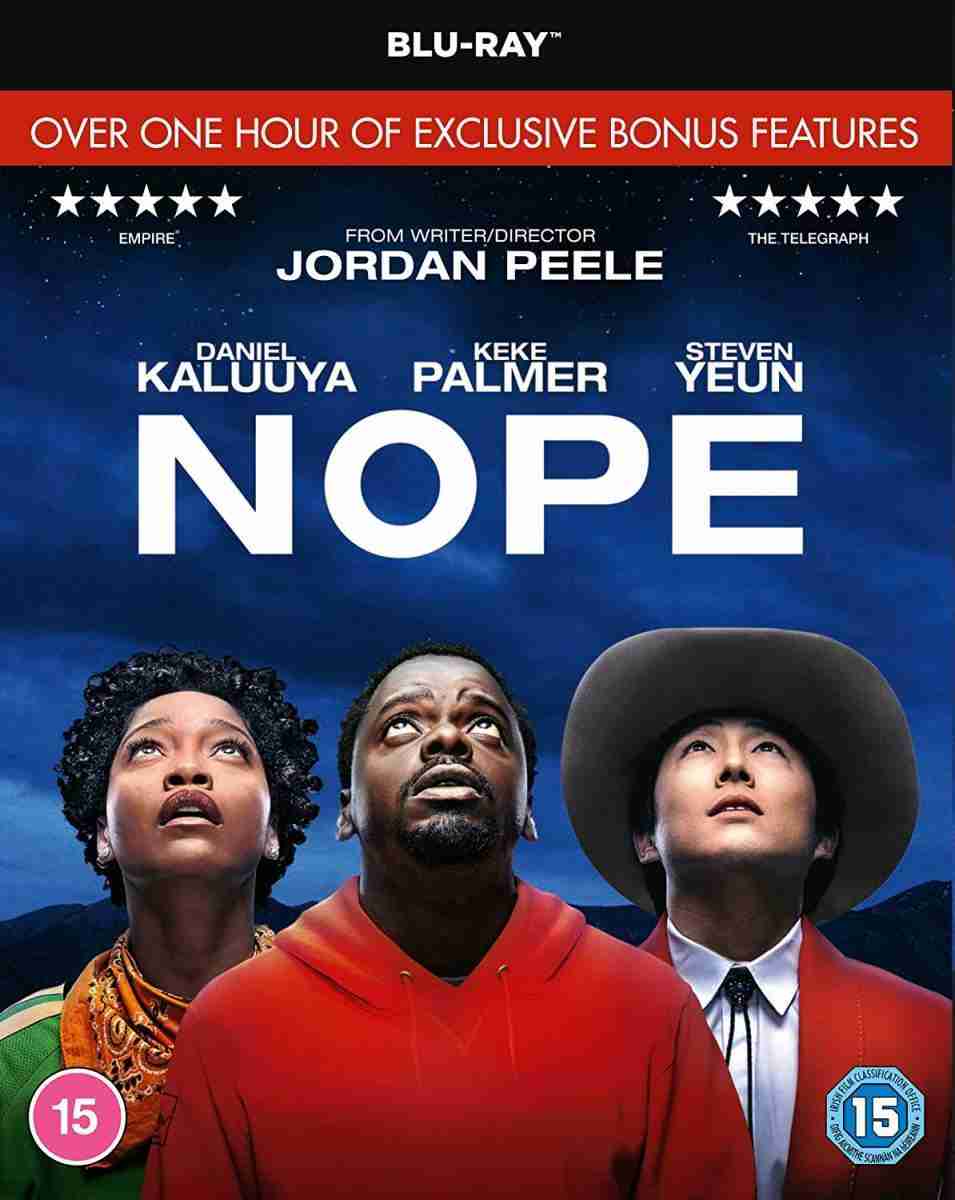 Nope arrives on Blu-ray with a superb 1080p presentation, doing full justice to the big budget, made for IMAX visuals, and the glorious Agua Dulce desert vistas. As expected, the picture is beautifully clean and boasts spectacular vibrant colours, fine detail and crisp, clean textures.

Again, the English Dolby Atmos audio presentation is flawless and does full justice to the thundering, immersive soundscape, which is a crucial element of the film. Dialogue is clean and crisp and the score is perfectly rendered. It’s a seamless, perfectly balanced presentation that makes full use of the surround set up with some hefty bass really putting the subwoofer through its paces!