The Downton gang return to the big screen for the second time in this charming sequel to 2019’s box office hit, Downton Abbey, a familiar and comforting new chapter in the Downton story which splits the action between a now leaking and creaking interior of the Abbey and the contrasting sun-kissed vistas of the South of France.

Expanding the scale of the first film, Downton Abbey: A New Era sees a number of the extended Grantham family heading off to the arresting French Riviera to uncover a decades old mystery involving the Dowager Countess (Maggie Smith) and a lavish villa that was gifted to her by the enigmatic Marquis de Montmirail many moons ago, much to the surprise of Lord Grantham (Hugh Bonneville) and the family.

Meanwhile, in a fun homage to Singin’ in the Rain, a film company wishes to hire Downton to shoot a silent movie, however despite initial reluctance, the family quickly realise that the sizeable fee will help pay for the much needed repairs to the old leaking roof and so happily accept the offer. While some of the family head off to France, Lady Mary (Michelle Dockery) decides to stay to oversee production at the Abbey.

However, due to arrival of ‘Talking Pictures’ and the popularity of the newly released The Jazz Singer, the studio cancels production on the film as silent movies are no longer deemed profitable. Lady Mary then suggests they rework the silent film into a talking picture which pleases the film’s director (Hugh Dancy), though when brash and haughty leading lady Myrna Dalgleish (Laura Haddock) begins to cause concern – mainly due to her difficult ways and an alarmingly strong Southern accent – Lady Mary and the excitable Downton staff are drafted in to help save the day.

Simon Curtis does a sterling job directing from a fun and cleverly constructed screenplay by series creator Julian Fellowes, which not only freshens things up but expands the often rather insular plot lines and narratives well outside the Abbey walls with added depth, intriguing backstories and new character arcs that open up the Downton (cinematic) universe in an intriguing fashion.

As you might expect, Downton Abbey: A New Era looks beautiful, Andrew Dunn’s cinematography is glorious, the design work and production values are exceptional and the sturdy ensemble cast are on top form. Fellowes has some great fun with Jim Carter’s Carson and the clash of worlds during the French sequences, with Carson refusing to relax his Head Butler duties, is often hilariously rendered. There’s a fun scene with Carter and Imelda Staunton’s Lady Bagshaw too including a nice little in-joke!

John Lunn’s expansive score introduces some interesting new motifs and sounds as rich and as gorgeous as you would hope.

Downton Abbey: A New Era is a sophisticated, enchanting and often very moving addition to the franchise and, for Downton fans, it is a film that will surely be watched, rewatched and enjoyed a great many times over the years to come. 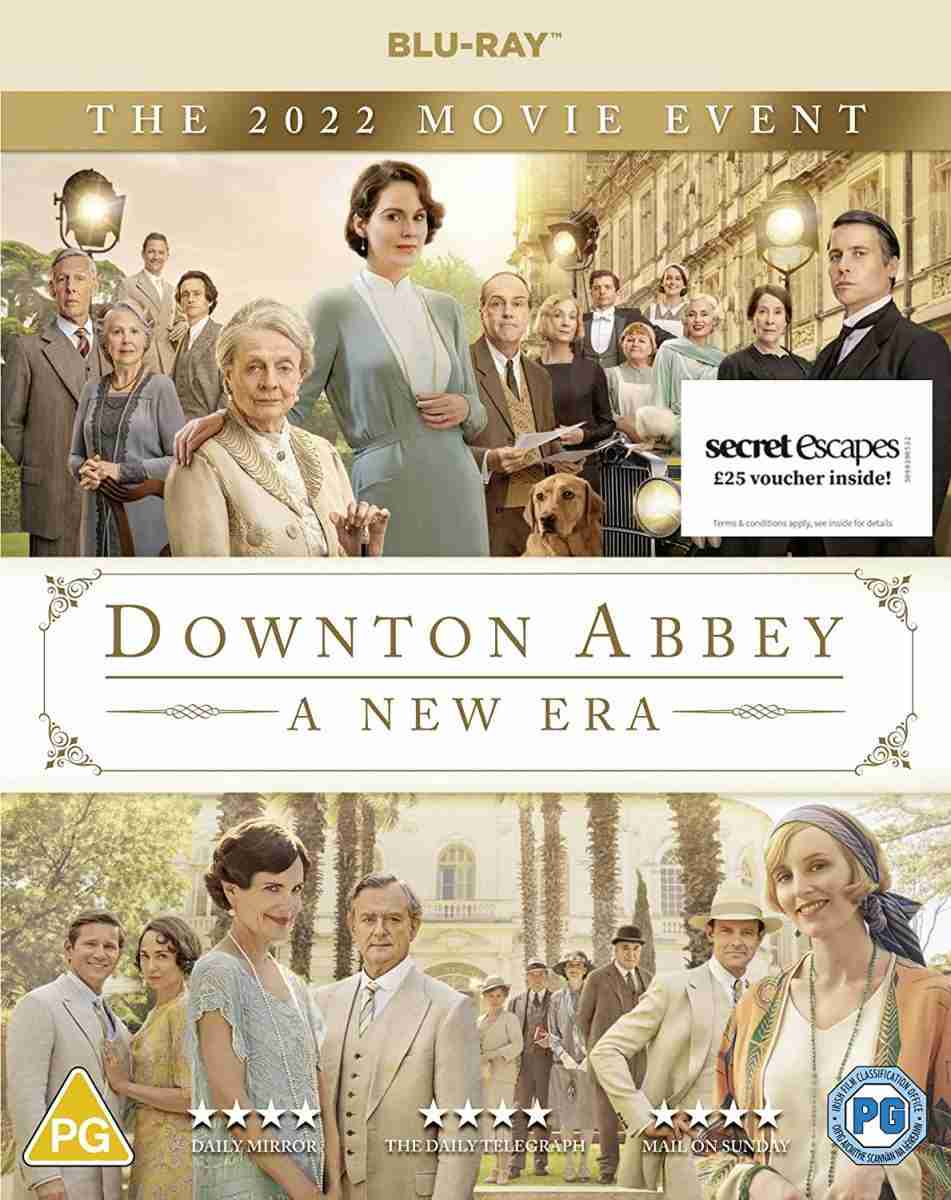 The image is pretty much flawless, with razor sharp definition, fine detail, and warm, rich colours, doing full justice to the elegant and evocative design work. The external South of France location shots are again beautifully luscious, boasting rich golden and green hues in and around the villa and landscape.

The Dolby Atmos soundtrack is never overwhelmingly showy or bassy, but dialogue is incredibly clean and crisp and the surround mix certainly offers more than enough atmosphere and immersion. Lunn’s sweeping score is an absolute joy and sounds exquisite.