Before his daughters were even born, Richard Williams had already written up an eighty-five-page plan mapping out their entire lives and careers as tennis professionals, and began coaching them on the abandoned courts around Compton when they were just four and a half years old, come rain or shine (usually in the rain, and usually at night).

Led by an Academy Award-nominated Will Smith in one of the finest performances of his career, Reinaldo Marcus Green’s stirring, crowd-pleasing biopic offers a joyous look at the early years of two giants of the sporting world, Venus (Saniyya Sidney) and Serena Williams (Demi Singleton), charting their hard-fought rise through the ranks from child prodigies to international stardom under the strict guidance of their unyielding father.

Richard is painted as a very difficult man; he’s overbearing, he’s determined and he has a clear vision for everything. His structured plan is the driving force behind every singular decision he makes, and he doesn’t suffer those who try to interfere and steer his daughters away from the path he has so intricately mapped out. Though for all his flaws, Richard is ultimately a loving and caring father. He only wants them to succeed and does everything he possibly can to help drive Venus and Serena to greatness. Things only happen when he decides it is the right move for his daughters, and he is careful not to push them too hard too young and watch them burn out. He has heated clashes with coaches, agents and executives offering them major sponsorship deals, but he only acts in what he believes is in their best interest.

The eponymous Richard may dominate the narrative here but the girls’ mother Oracene “Brandy” Price (a superb Aunjanue Ellis in an OSCAR-nominated supporting performance) is equally instrumental in their story and plays a vital role in mentoring, coaching and instilling them with the self-belief to overcome pressure and achieve greatness. Sadly, her contributions often seem to be overshadowed by her dominant husband.

There is no question that the film is driven by Smith’s commanding, larger-than-life performance, full of charisma and star wattage, but the film boasts an exceptionally well cast ensemble with strong support from Ellis, Sidney, and Singleton, as well as Tony Goldwyn as coach Paul Cohen, and a brilliant Jon Bernthal as the famed tennis academy coach Rick Macci.

Zach Baylin’s sparkling, OSCAR-nominated screenplay exudes heart and warmth aplenty, with a good dose of laugh out loud humour added in. Some of the most affecting sequences are those of normal family life where we see the sisters at home just having fun and spending time with their sisters away from the court, and Green and Baylin navigate these scenes beautifully.

It is interesting to note that both Venus and Serena, and their half-sister Isha Price, are all listed as executive producers on the film, as King Richard is far from a laid-bare, warts and all character study. It would be interesting to know just how much input they had in the overall shooting script, and if any of the more negative aspects were omitted. It is a largely sympathetic portrait and only briefly hints at some of his past struggles, though there is enough grit and emotional depth in the piece to make it feel genuine, authentic and grounded, without ever coming across as overly glossy or sentimental.

Not only is King Richard a refreshing and uplifting sports biopic, it also offers a powerful and socially aware look at prejudice, discrimination and class division, the struggles of domestic life, and the sacrifices those less privileged are forced to make to succeed in a world where the odds are stacked against them. 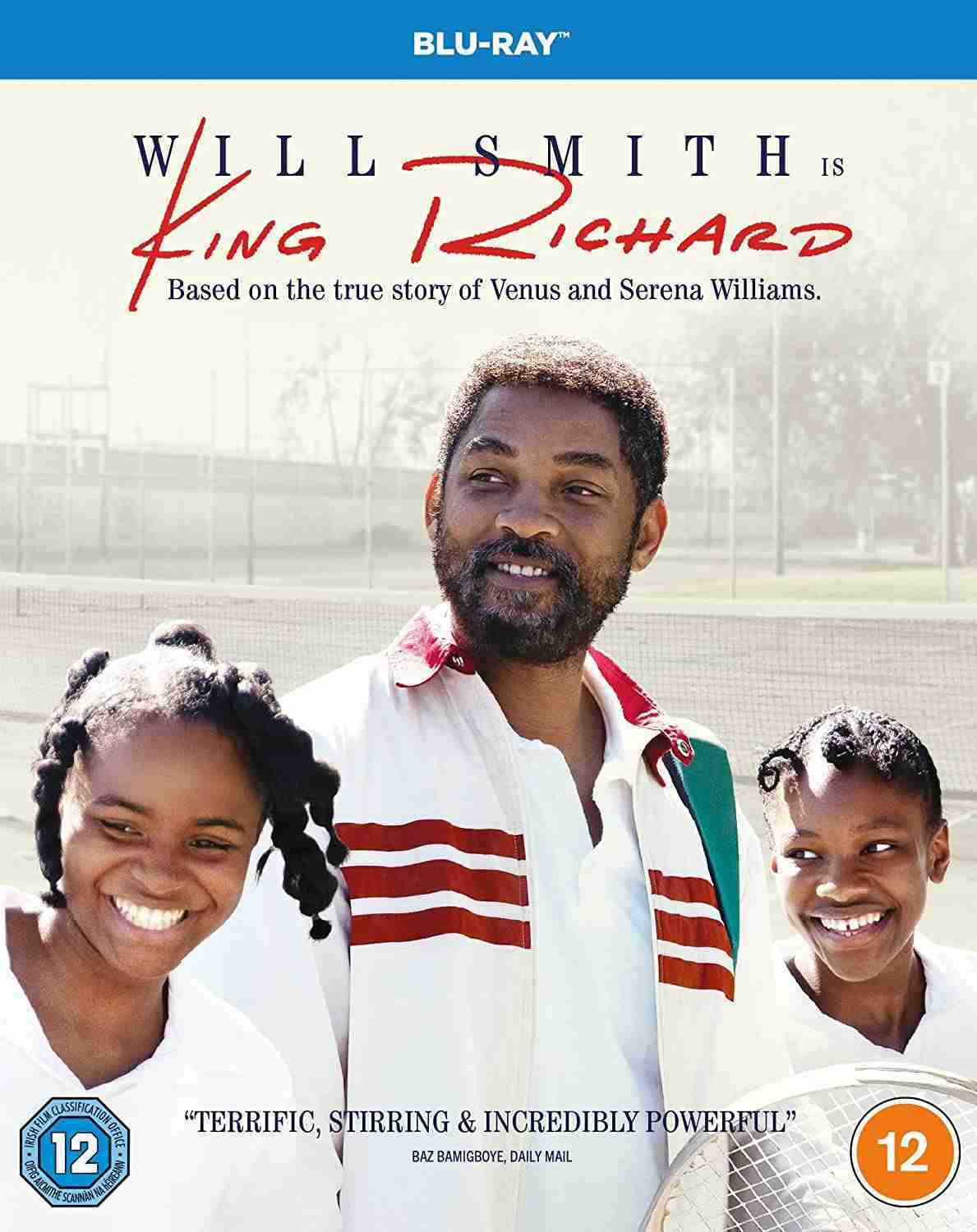 The 1080p Blu-ray transfer is excellent, boasting rich, warm colours, good textures and a clean, crisp presentation. Fine details are not always razor sharp, but cinematographer Robert Elswit lenses the film with a softer, warmer tone that makes excellent use of the natural, golden hour hues.

The Dolby Atmos audio track seems a strange choice given this is a largely dialogue-driven film that is mostly light on audio effects, but it does come into its own during the latter crowd-heavy stadium sequences and proves very effective. Overall, the audio presentation is exceptionally crisp and background ambience is well rendered across the rear channels.