It is the film that first introduced audiences to Brenda Bristols in the infamous ‘See You Next Wednesday‘, put Rick Baker’s extraordinary, OSCAR-winning special make-up effects firmly on the map, and gave us arguably the greatest movie pub of them all, ‘The Slaughtered Lamb‘, and now, 40-years on from its original release, John Landis’ landmark 1981 horror-comedy An American Werewolf in London arrives on stunning 4K Ultra HD for the very first time courtesy of German distributor Turbine.

Made following the success of Landis’ earlier features The Kentucky Fried Movie (1977), National Lampoon’s Animal House (1978), and The Blues Brothers (1980), though conceived over a decade earlier while Landis was working as a production assistant on Kelly’s Heroes (1970), An American Werewolf in London follows two young American backpackers, David and Jack, who are attacked by a mysterious creature whilst trekking across the North York Moors late one night.

Despite being warned to stick to the road and stay off the moors by the hostile pub-dwellers in the Slaughtered Lamb, the pair fail to heed that sage advice and Jack is soon mauled to death by the light of the silvery full moon. David is also attacked and wakes up some weeks later in a London hospital in the care of Jenny Agutter’s Nurse Alex Price.

While in the hospital, David is visited by an undead and slowly decomposing Jack who explains that the mysterious beast that attacked them was in fact a werewolf, and that in order to break the curse that causes him to remain undead, David must now sever the bloodline of the werewolf that attacked them and kill off the last remaining werewolf; no prizes for guessing who that is!

Frightening and hilarious, twisted and gory, in equal measures, Landis’ expertly crafted comedy-horror still holds up brilliantly and remains a classic of the genre, and Baker’s extraordinary transformation effects – which saw Baker win the first-ever Academy Award for Best Makeup – still look incredible to this day.

Arguably the greatest werewolf movie of them all, An American Werewolf in London is a thrilling and wildly entertaining film that signalled an exciting new chapter for the horror-comedy genre and continues to grow its cult status to this day. 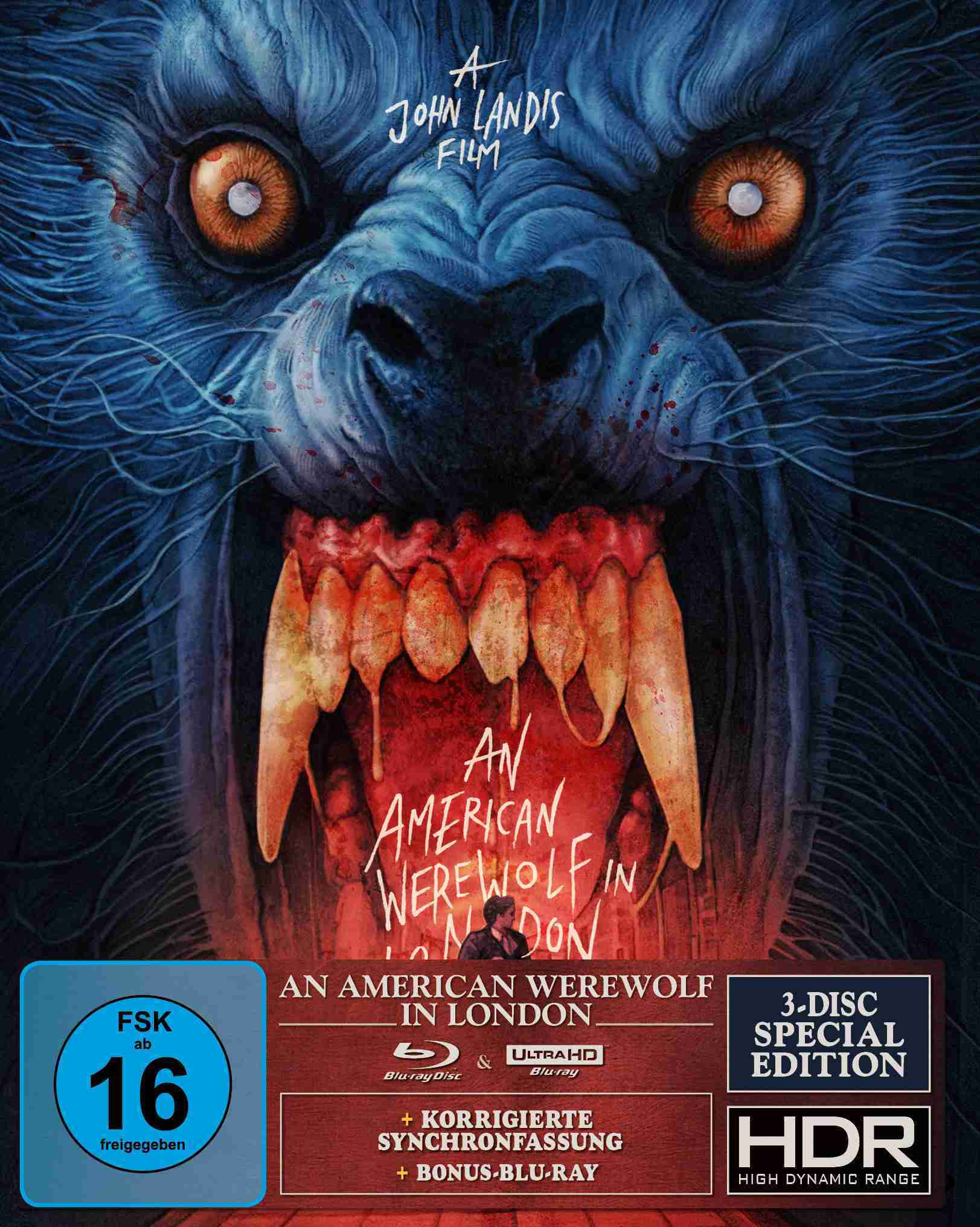 Turbine’s newly remastered 4K transfer (with HDR!) looks fantastic, and gives us what is easily the best presentation of the film to date. There are some softer sequences but for the most part the image is superb. Details are noticeably sharper (including shadow detail), black levels look deeper, brightness levels are significantly improved and colours look rich and vibrant.

The 5.1 DTS-HD Master Audio track offers clean, clear dialogue throughout and some solid dynamic range, however, aside from the opening moors sequences, filled with sweeping winds and various immersive howls and growls, surround sound across the channels is a little underwhelming, and often non-existent.

Turbine’s must have release offers up a veritable treasure trove of bonus features spread across three discs (1 x 4K, 2 x Blu-ray), including audio commentaries, interviews and a wealth of behind the scenes and making of content; more than six hours worth, in fact!

An American Werewolf in London looks better than ever thanks to Turbine’s stunning new 4K edition of the film, and it presents a significant upgrade on any previously available editions. For fans of the film this is an absolute essential addition to your collection, and to be quite honest it is difficult to imagine the film looking any better!