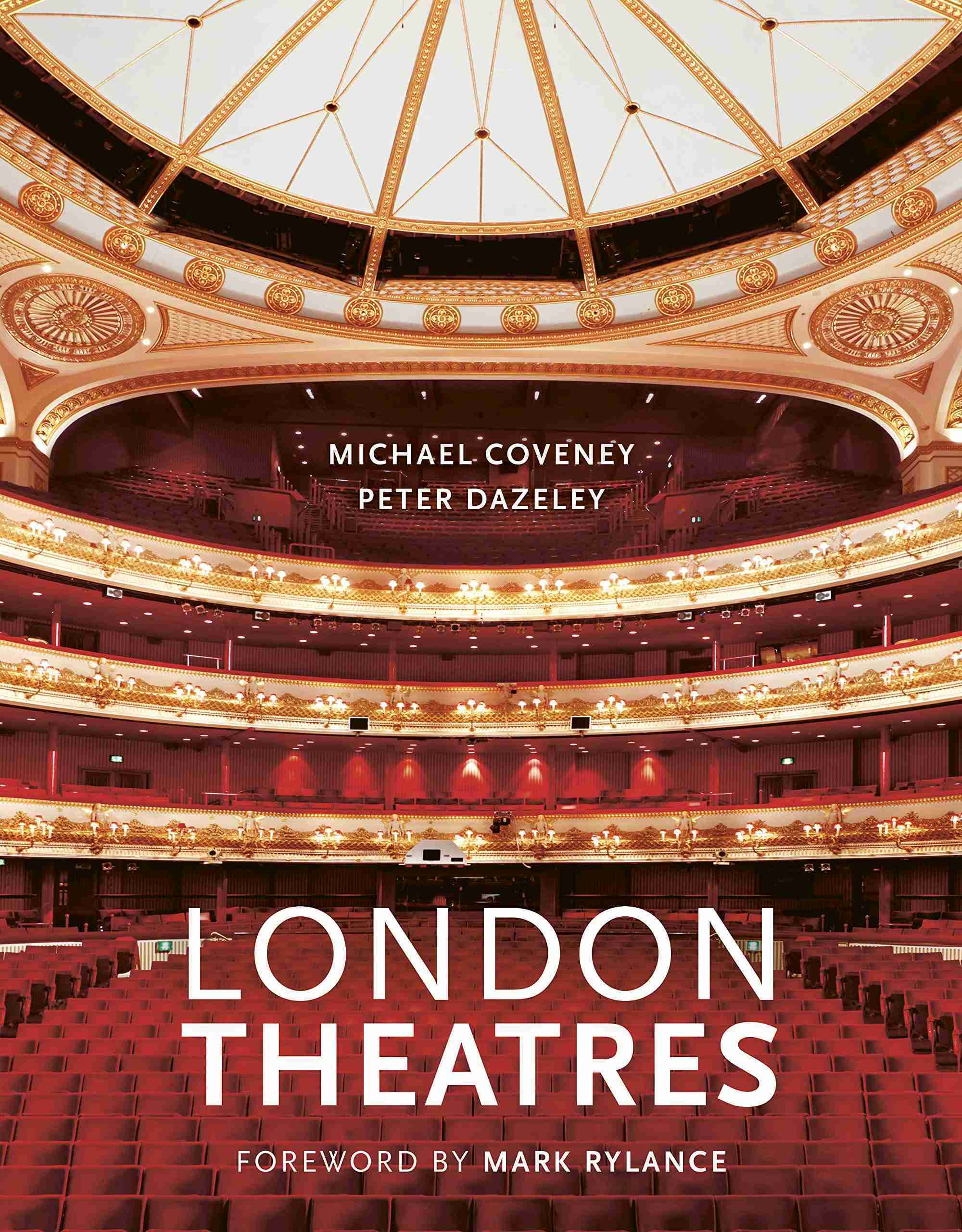 Fully revised and updated for 2020, this exquisite new edition of Michael Coveney and Peter Dazeley‘s definitive visual guide to London’s most beautiful and best loved theatres (now featuring an additional 10 from the original 2017 version) is an absolute gem, and for anyone with a keen interest in theatre, West End theatres and theatre architecture, LONDON THEATRES (New Edition) is perhaps the most beautiful coffee table book you could possibly hope to own!

London is the undisputed theatre capital of the world. From world-famous musicals to West End shows, from cutting-edge plays to Shakespeare in its original staging, from outdoor performance to intimate fringe theatre, the range and quality are unsurpassed.

Leading drama critic Michael Coveney invites you on a tour of more than 50 theatres that make the London stage what it is. With stories of the architecture, the people and the productions which have defined each one, alongside sumptuous photographs by Peter Dazeley of the auditoriums, public and backstage areas, this illustrated overview of London’s theatres is a book like no other. A must for fans of the stage! 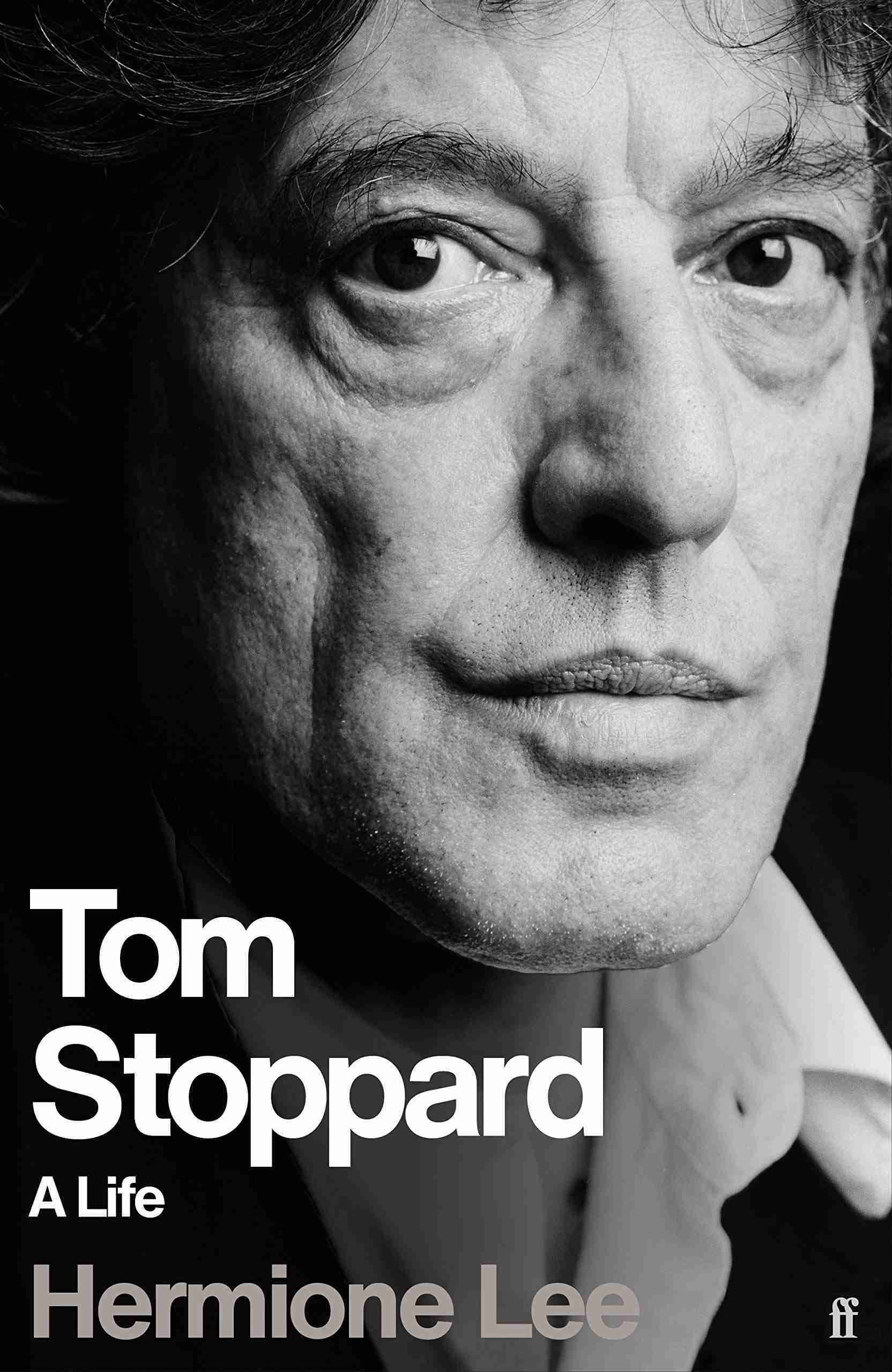 Dame Hermione Lee, fellow of the British Academy, the Royal Society of Literature, and the University of Oxford – amongst others – and one of our leading literary biographers pens this definitive biography of one of the world’s finest living playwrights, Sir Tom Stoppard.

With unprecedented access to private papers, diaries, letters, and countless interviews with figures ranging from Felicity Kendal to John Boorman and Trevor Nunn to Steven Spielberg, Lee builds an extraordinary portrait of one of our greatest playwrights.

Drawing on several years of long, exploratory conversations with Stoppard himself, TOM STOPPARD: A LIFE tracks his Czech origins and childhood in India to every school and home he’s ever lived in, every piece of writing he’s ever done, and every play and film he’s ever worked on; but in the end this is the story of a complex, elusive and private man, which tells you an enormous amount about him but leaves you, also, with the fascinating mystery of his ultimate unknowability.

Tom Stoppard‘s Olivier Award-winning new play, Leopoldstadt, which had its world premiere at Wyndham’s Theatre in London’s West End on on 25 January 2020, is available to buy now in both Paperback and Hardcover formats, as well as Limited Collector’s Edition (signed by Stoppard) also from Faber & Faber. 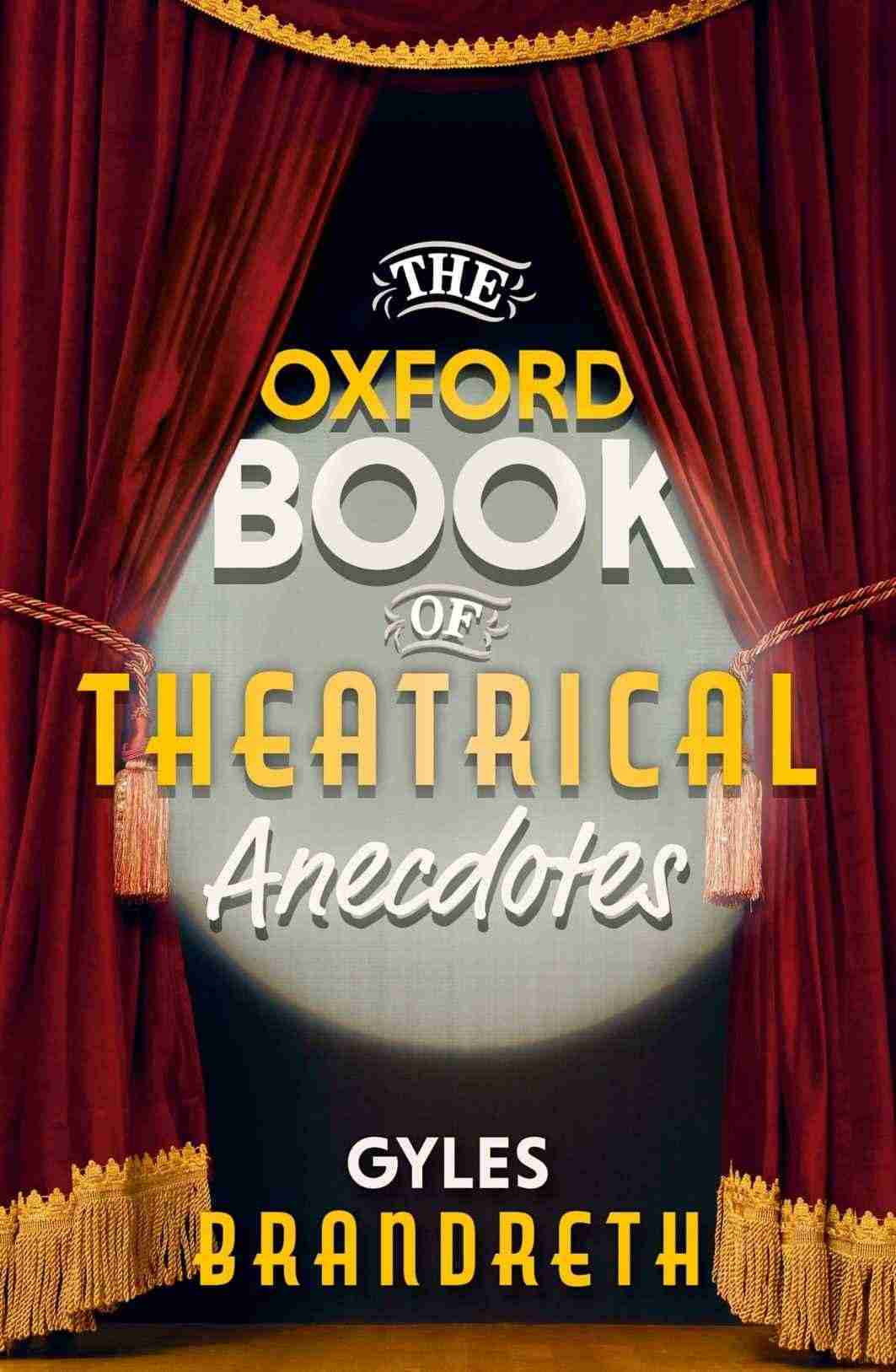 THE OXFORD BOOK OF THEATRICAL ANECDOTES

The ever wonderful Gyles Brandreth edits this joyous and hugely entertaining new anthology of theatrical anecdotes, spanning a vast array of theatrical stories and experiences from the age of Shakespeare and Marlowe to the age of Stoppard and Mamet, from Richard Burbage to Richard Briers, from Nell Gwynn to Daniel Day-Lewis, from Sarah Bernhardt to Judi Dench.

THE OXFORD BOOK OF THEATRICAL ANECDOTES provides a comprehensive, revealing, and hugely entertaining portrait of the world of theatre across four hundred years.

Many of the anecdotes are humorous: all have something pertinent and illuminating to say about an aspect of theatrical life—whether it is the art of playwriting, the craft of covering up missed cues, the drama of the First Night, the nightmare of touring, or the secret ingredients of star quality.

Edmund Kean, Henry Irving, John Gielgud, Laurence Olivier, Ellen Terry, Edith Evans, Maggie Smith, Helen Mirren — the great ‘names’ are all here, of course, but there are tales of the unexpected, too — and the unknown. This is a book — presented in five acts, with a suitably anecdotal and personal prologue from Gyles Brandreth — where, once in a while, the understudy takes centre-stage and Gyles Brandreth treats triumph and disaster just the same, including stories from the tattiest touring companies as well as from Broadway, the West End and theatres, large and small, in Australia, India, and across Europe. 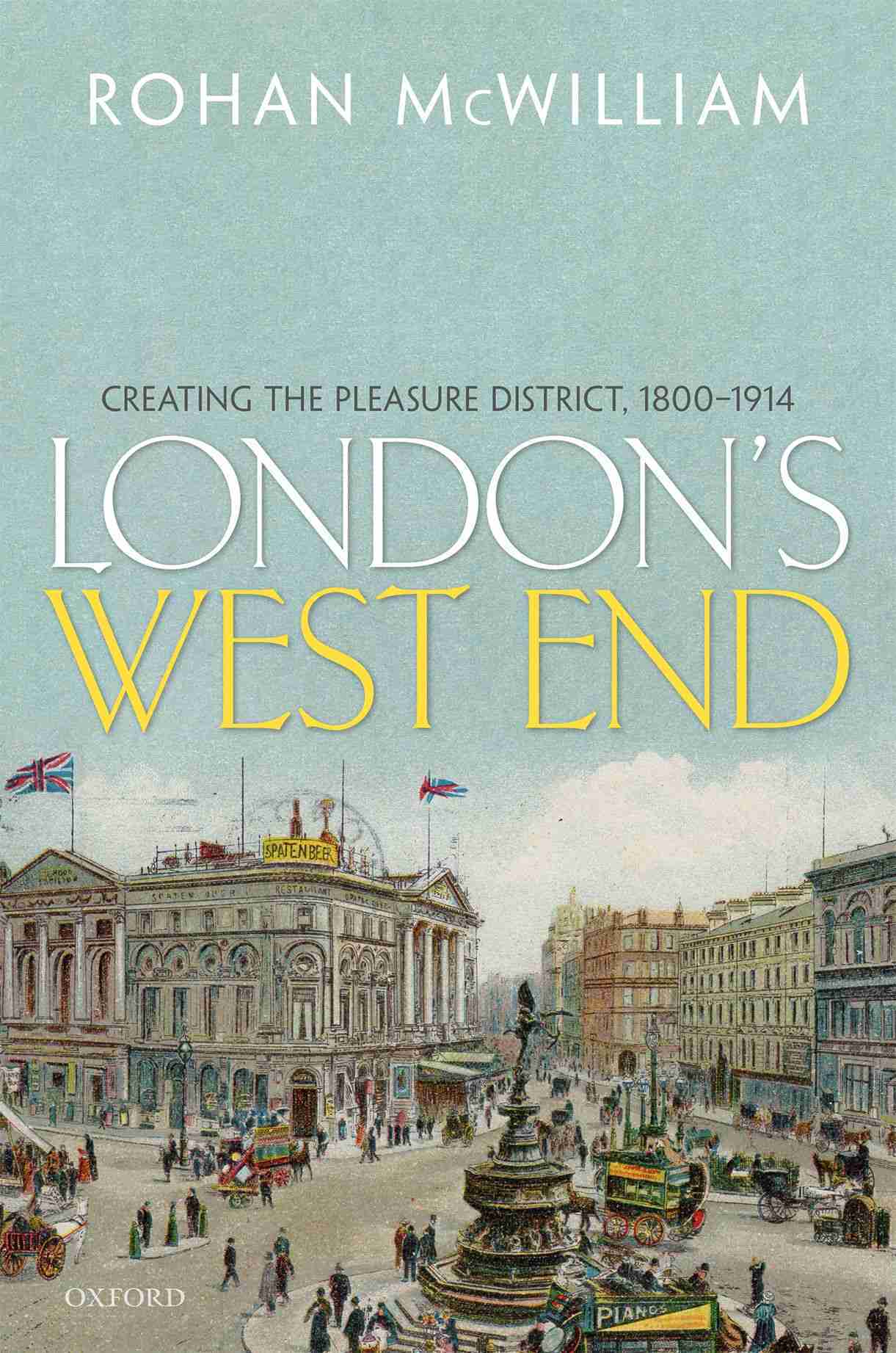 For the first time, Professor Rohan McWilliam‘s takes readers on an enthralling journey through the history of the area which has enthralled millions, covering the growth of theatres, opera houses, galleries, restaurants, department stores, casinos, exhibition centres, night clubs, street life, and the sex industry.

The area from the Strand to Oxford Street came to stand for sensation and vulgarity but also the promotion of high culture. The West End produced shows and fashions whose impact rippled outwards around the globe. During the nineteenth century, an area that serviced the needs of the aristocracy was opened up to a wider public whilst retaining the imprint of luxury and prestige.

LONDON’S WEST END: Creating the Pleasure District, 1800-1914 tells the story of the great artists, actors and entrepreneurs who made the West End: figures such as Gilbert and Sullivan, the playwright Dion Boucicault, the music hall artiste Jenny Hill, and the American Harry Gordon Selfridge who wanted to create the best shop in the world. At the same time, McWilliam explores the distinctive spaces created in the West End, from the glamour of Drury Lane and Covent Garden, through to low life bars and taverns. We encounter the origins of the modern star system and celebrity culture.

LONDON’S WEST END: Creating the Pleasure District, 1800-1914 moves from the creation of Regent Street to the glory days of the Edwardian period when the West End was the heart of empire and the entertainment industry. Much of modern culture and consumer society was shaped by a relatively small area in the middle of London. This pioneering study establishes why that was.