Christmas 2020 is nearly upon us, so to help with some last minute gift inspiration we’ve put together a series of themed Gift Guides rounding up a small selection of some our favourite new and recent releases ideal for gifts and stocking fillers – with a little something for everyone! 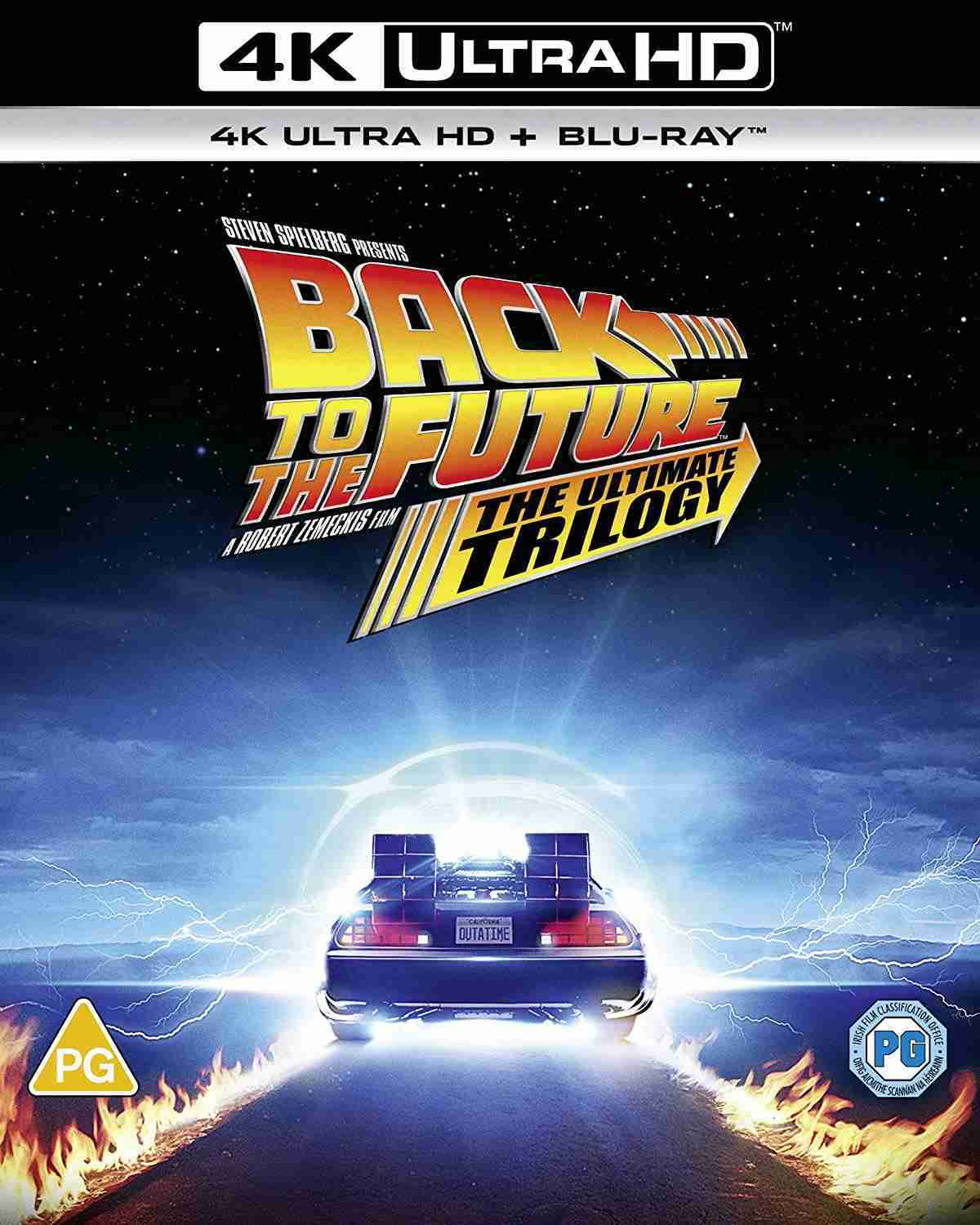 Experience one of the best loved trilogies of them all like never before with BAC­­K TO THE FUTURE: THE ULTIMATE TRILOGY, available now on 4K Ultra HD for the first time ever – along with newly restored Blu-ray editions – from Universal Pictures Home Entertainment, to celebrate the 35th Anniversary of the groundbreaking first film.

BAC­­K TO THE FUTURE: THE ULTIMATE TRILOGY is loaded with bonus material, including a bonus disc that comes with over an hour of brand-new content such as rare audition footage from Hollywood stars Ben Stiller, Kyra Sedgwick, Jon Cryer, Billy Zane, Peter DeLuise and C. Thomas Howell, a tour of the film’s props and memorabilia hosted by co-writer/producer Bob Gale, a sneak peek at the new musical show, and a special episode of the popular YouTube Series “Could You Survive The Movies?” 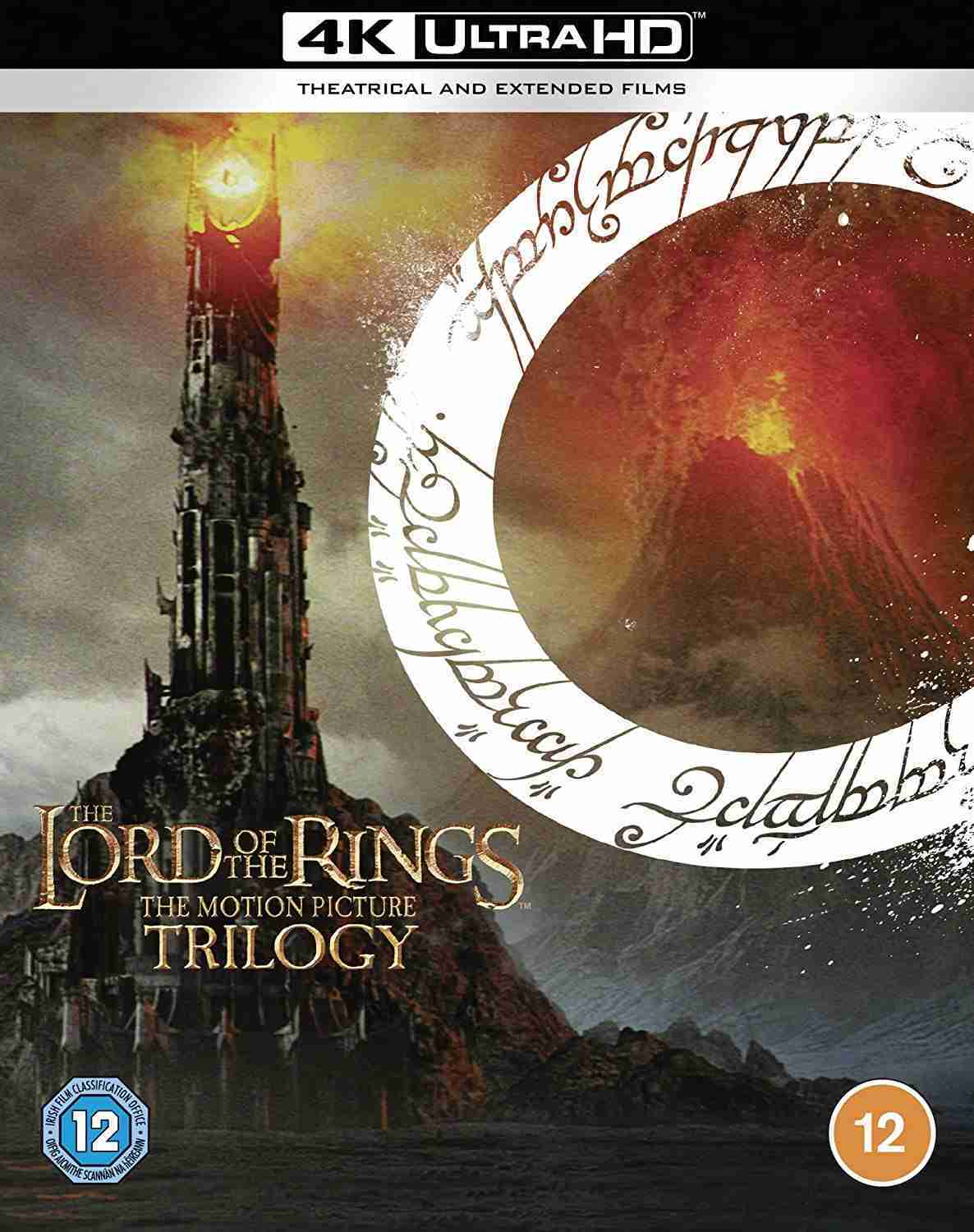 Arguably the home entertainment event of the year, Peter Jackson’s Academy Award®-winning The Lord of the Rings Trilogy and The Hobbit Trilogy are both available now in 4K Ultra HD box sets for the very first time ever, courtesy of Warner Bros. Home Entertainment.

From New Line Cinema and Metro-Goldwyn-Mayer Pictures, the two epic trilogies include both the theatrical and extended versions of the six films in glorious 4K Ultra HD with HDR.

Many Lord of the Rings fans will undoubtedly own the films in numerous different versions already, however with the 4K remastering process overseen by Peter Jackson himself – using the original camera negatives and film-outs – these staggering new 4K versions offer fans a definitive presentation of the two trilogies, complete with reference quality video and audio.

The two box sets do miss the extras found on previous editions, however a 4K UHD “Middle-earth” Ultimate Collectors’ Edition, featuring the theatrical and extended versions of all six films, along with new bonus content, previously released Blu-ray discs of The Hobbit Trilogy, and remastered Blu-ray discs of The Lord of the Rings Trilogy, will be released in summer 2021. 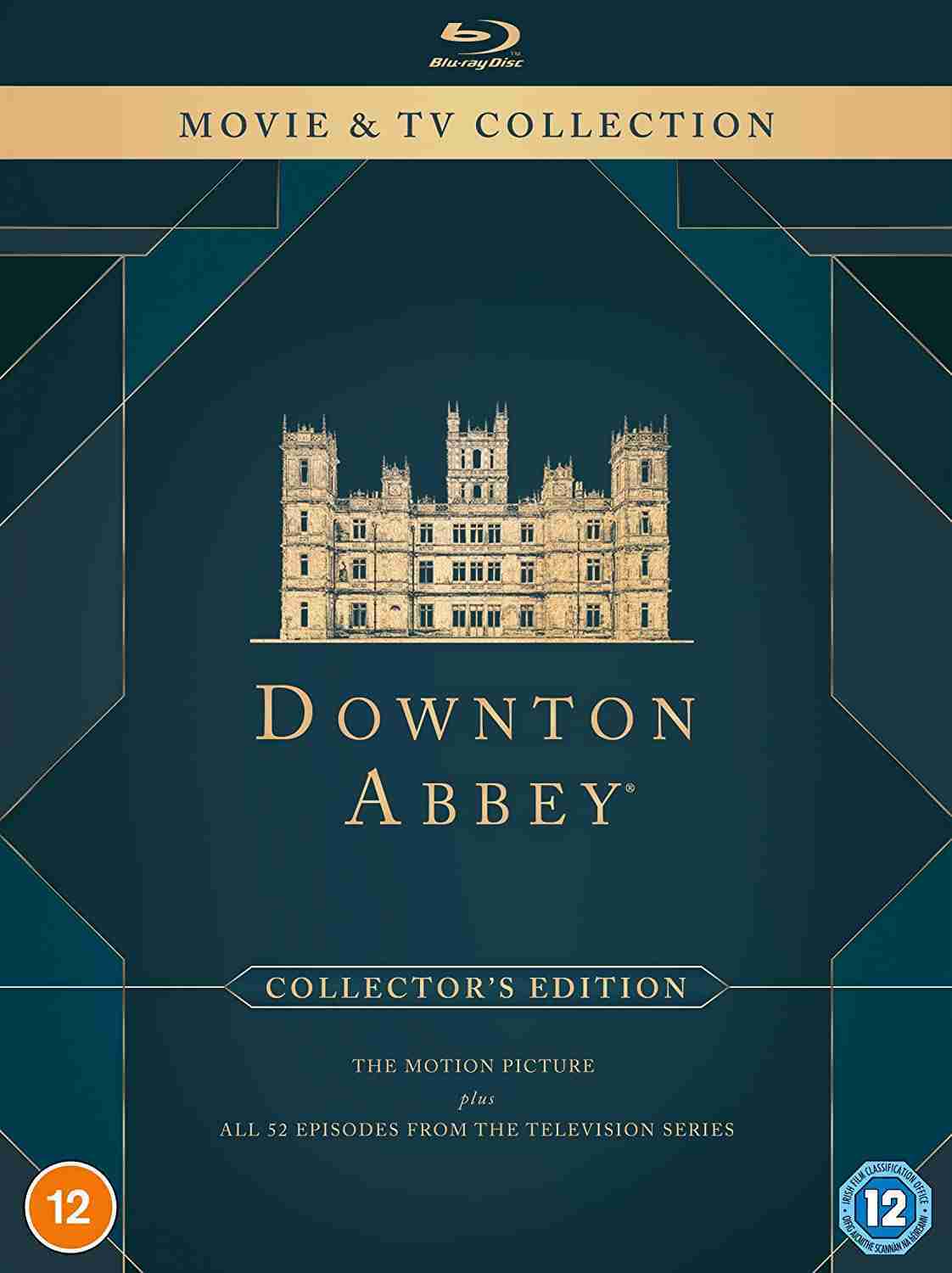 Featuring all six series (52 episodes) of the blockbuster period drama, alongside the 2019 Downton Abbey film, the Downton Abbey Movie & TV Collection is an ideal gift for family and friends this Christmas, not to mention perfect for some sophisticated box set binging over the festive period.

What’s more, there are more than 5 hours of bonus features and behind the scenes footage to keep Downton fans glued to their screens!

Downton Abbey, with all its splendour and scandal, has found its way into the hearts of millions around the globe.

Home to the Crawley family and their servants, Downton appears to be all elegance and order upon first glance, but no family is ever quite what it seems. Between the desires and dreams of all the residents, both upstairs and downstairs, a day in this household is never far from high drama.

Re-live the laughter, tears, tragedy and triumph leading up to the most spectacular event in the history of this grand estate, a Royal visit. 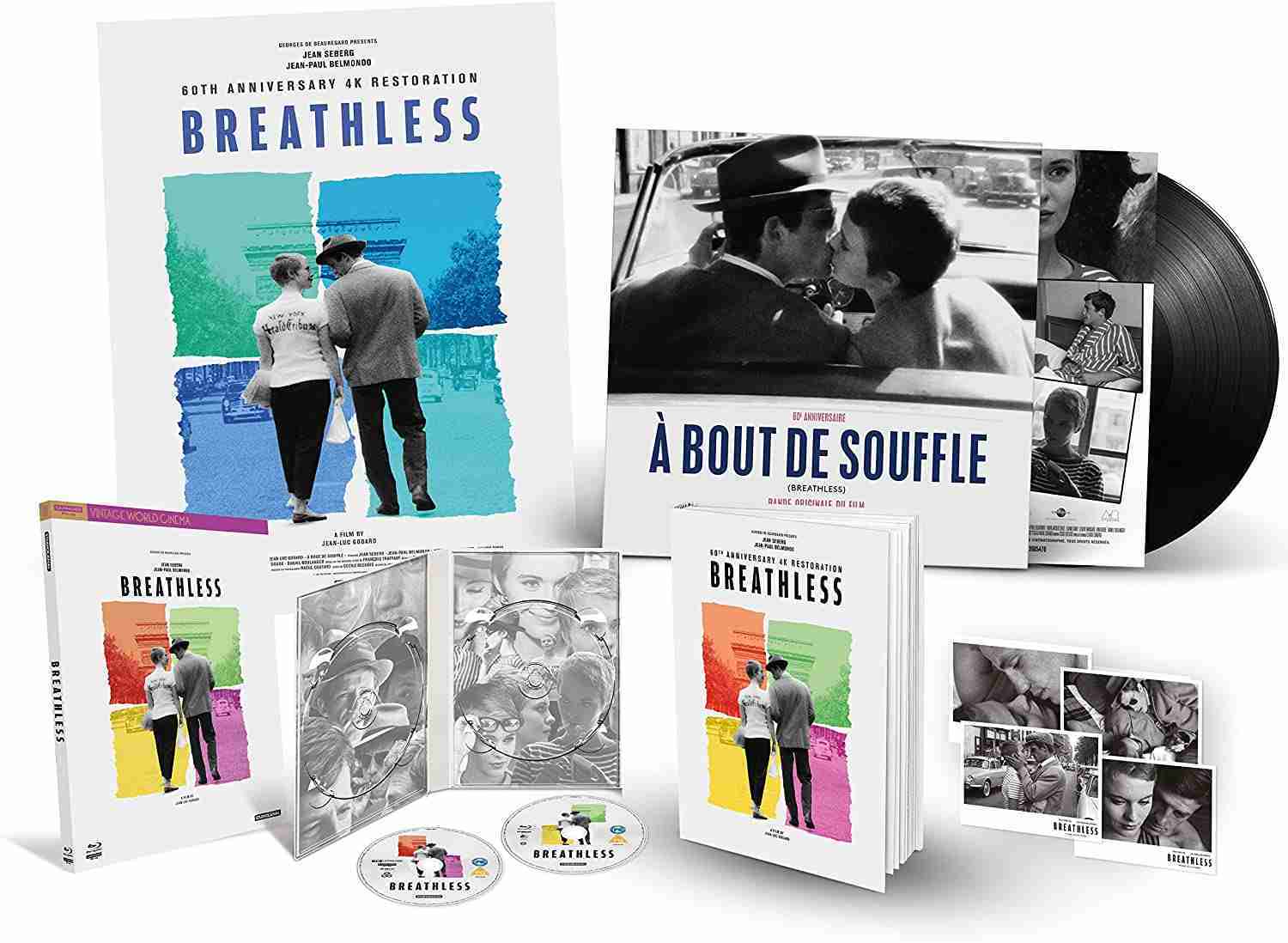 The epitome of cinematic cool which inspired a generation of moviemakers, BREATHLESS is based on a story by Francois Truffaut, photographed by New Wave legend Raoul Coutard, and features iconic performances from Jean-Paul Belmondo and Jean Seberg.

BREATHLESS (À Bout De Souffle) has been painstakingly restored in 4K by STUDIOCANAL with the help of the CNC, within the framework of the Selective Aid for the Digitisation of Cinematographic Heritage Works.

This restoration was supervised by the laboratory L’Image Retrouvée. The teams restored BREATHLESS from the original film negatives, which were originally shot on two types of film: Gevaert Belgium and Ilford Pancromatic.

Due respect was given to these two different textures of film during the restoration process, resulting in a fully realised 4K restoration which allows audiences to enjoy the film in this new definition, with full appreciation of the original artistic intentions of the Director. 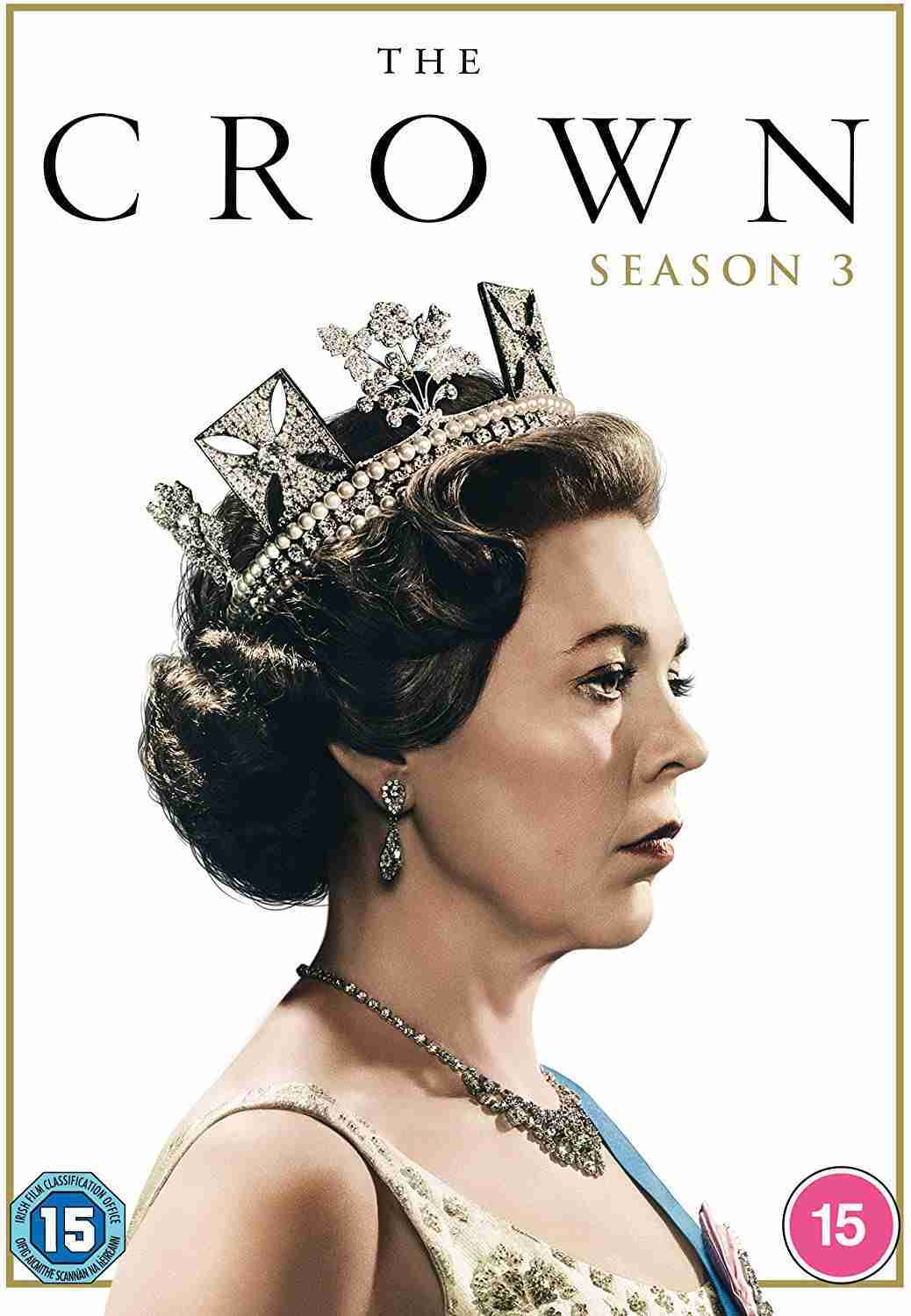 Catch up with Peter Morgan‘s multi-award-winning Netflix historical drama, The Crown, with The Crown: Season 1 & Season 2 and The Crown: Season 3, available now on both Blu-ray and DVD from Sony Pictures Home Entertainment.

The British Empire is in decline, the political world is in disarray, and a young woman takes the throne… a new era is dawning. Queen Elizabeth II is a 25-year-old newlywed faced with the daunting prospect of leading the world’s most famous monarchy while forging a relationship with legendary Prime Minister Sir Winston Churchill. The Crown explores the Queen’s private journey behind the public facade with daring frankness.

Season 2 follows Queen Elizabeth through the late 1950s and early ‘60s as she struggles to navigate a world that’s changing around her. She must face the challenges of a new era, from the Suez Canal crisis to the assassination of John F. Kennedy, while preserving both the monarchy and her marriage.

Season Three covers the time period between 1964 and 1977 and introduces an outstanding new ensemble cast led by Olivia Colman and Tobias Menzies. Beginning with Harold Wilson’s election as the Queen’s first Labour prime minister and ending with the Silver Jubilee of Elizabeth II, it follows pivotal moments such as the death and state funeral of Winston Churchill, the Aberfan disaster, the Apollo 11 moon landing and the Investiture of Prince Charles as the Prince of Wales. 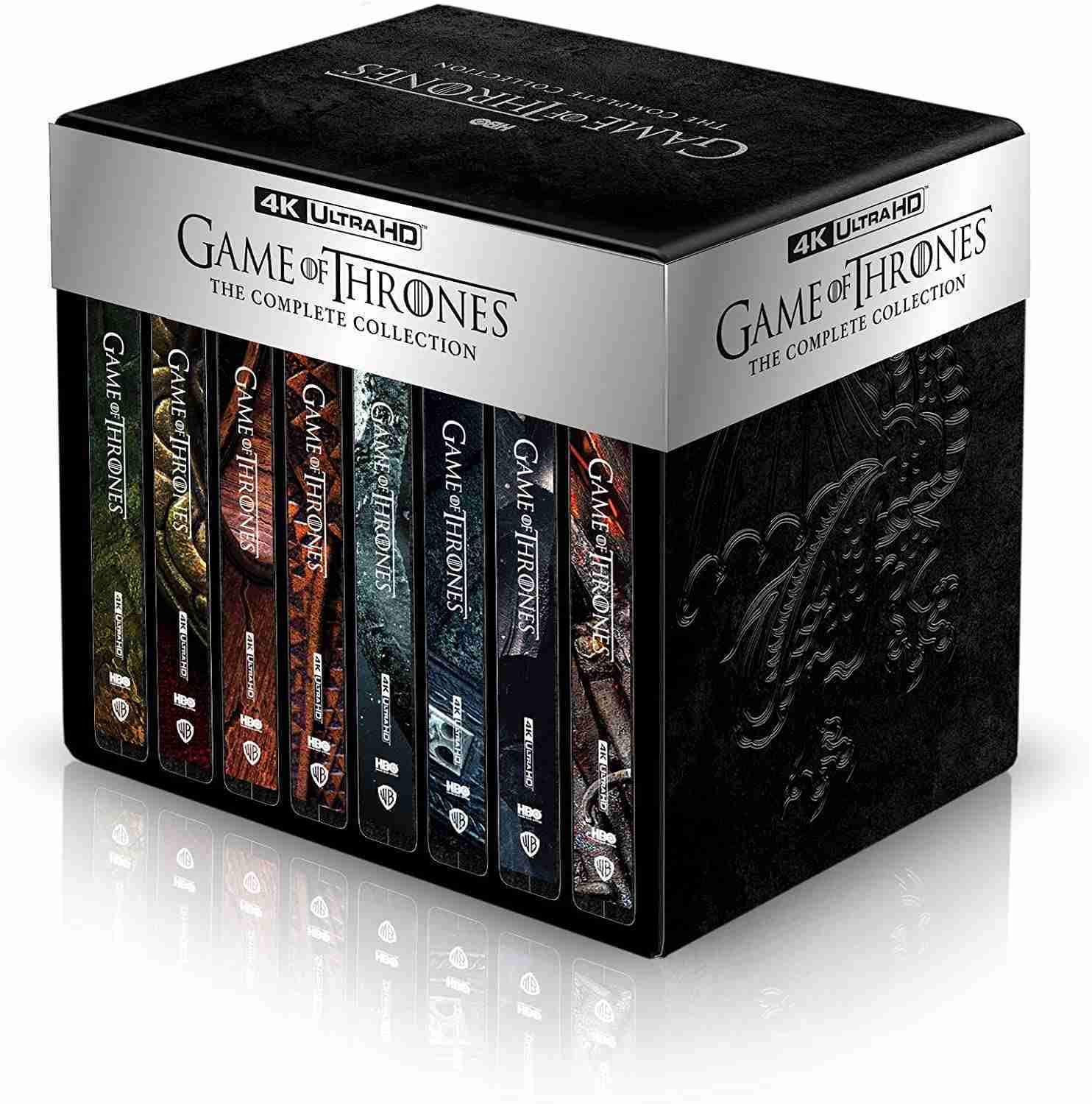 Last but note least, if you’re a die hard “Thronie” and want to rewatch the show in the best possible format available, why not treat yourself to Game Of Thrones: The Complete Collection in Limited Edition 4K Ultra HD Steelbook format, available now just in time for Christmas!

Based on the “A Song Of Ice And Fire” series by George R.R. Martin, Game Of Thrones follows kings and queens, knights and renegades, liars and noblemen as they vie for power.

In a land where summers span decades and winters can last a lifetime, trouble is brewing. Two powerful families are engaged in a deadly cat-and-mouse game for control of the Seven Kingdoms of Westeros. As betrayal, lust, intrigue and supernatural forces shake the four corners of the Kingdoms, their bloody struggle for the Iron Throne will have unforeseen and far-reaching consequences.

• Game of Thrones: Reunion Special: A two-part reunion show shot live in Belfast with the cast, both past and present, hosted by Conan O’Brien and available exclusively on these complete series collections. The reunion special is assembled in segments focused on Houses Lannister, Stark, & Targaryen and concludes with the key players all onstage for their final reflections on the years they shared in Westeros and Essos.

• Game of Thrones: The Last Watch: A documentary by filmmaker Jeanie Finlay chronicling the making of the final season.

• Audio Commentaries, Deleted and Extended Scenes, Behind-the-scenes featurettes and much more from all 8 seasons!