The September line-up also includes: the full version of Francesco Rosi’s revelatory humanist epic, Christ Stopped at Eboli, never before available on home video; Martin Scorsese’s World Cinema Project No. 3, which will gather six newly restored gems from around the world; and two hard-hitting noir classics from genre master Jules Dassin: Brute Force and The Naked City, which both make their Blu-ray debuts in new restorations. 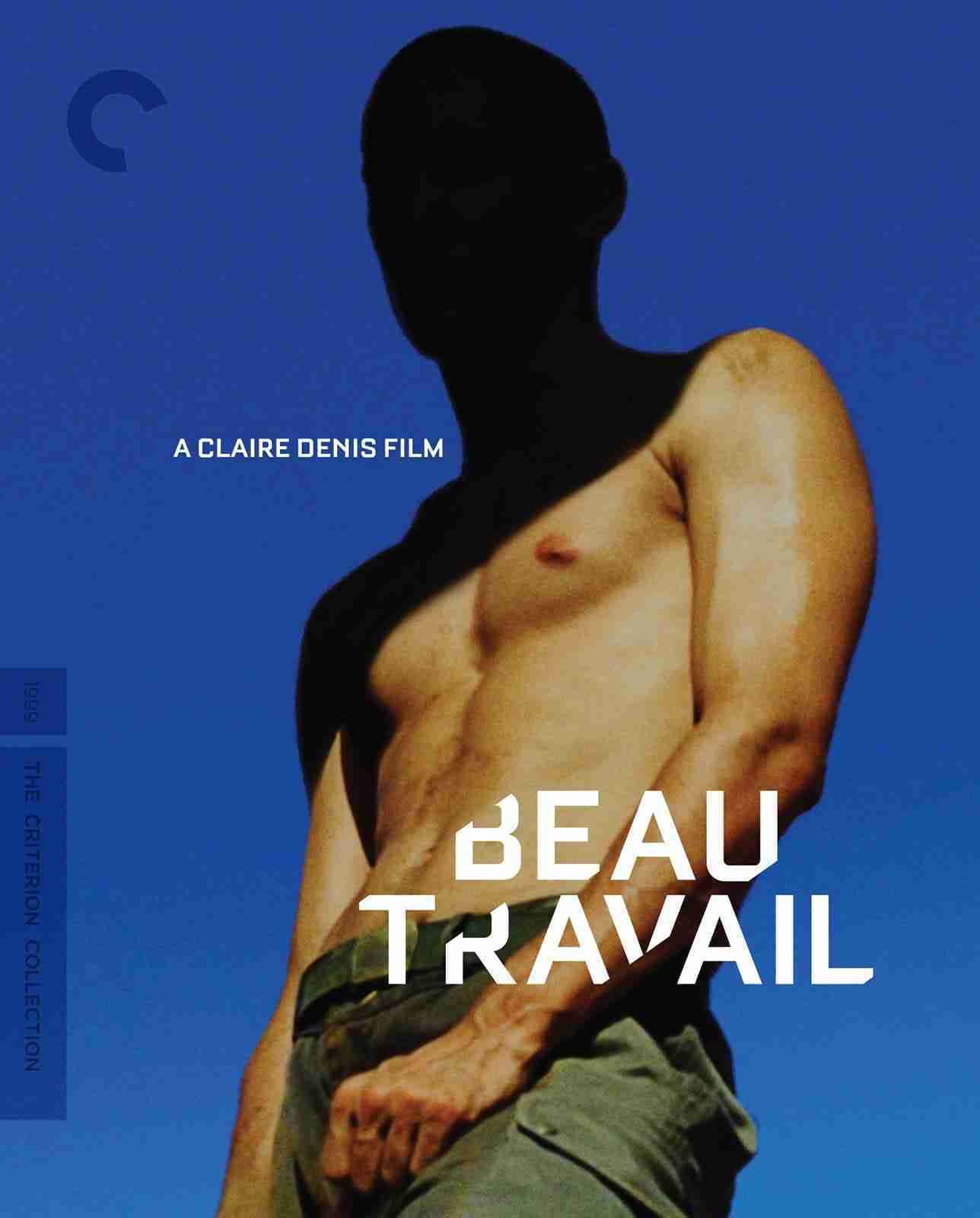 With her ravishingly sensual take on Herman Melville’s Billy Budd, Sailor, Claire Denis firmly established herself as one of the great visual tone poets of our time. Amid the azure waters and sunbaked desert landscapes of Djibouti, a French Foreign Legion sergeant (Denis Lavant) sows the seeds of his own ruin as his obsession with a striking young recruit (Grégoire Colin) plays out to the thunderous, operatic strains of Benjamin Britten. Denis and cinematographer Agnès Godard fold military and masculine codes of honor, colonialism’s legacy, destructive jealousy, and repressed desire into shimmering, hypnotic images that ultimately explode in one of the most startling and unforgettable endings in all of modern cinema.

• PLUS: An essay by critic Girish Shambu 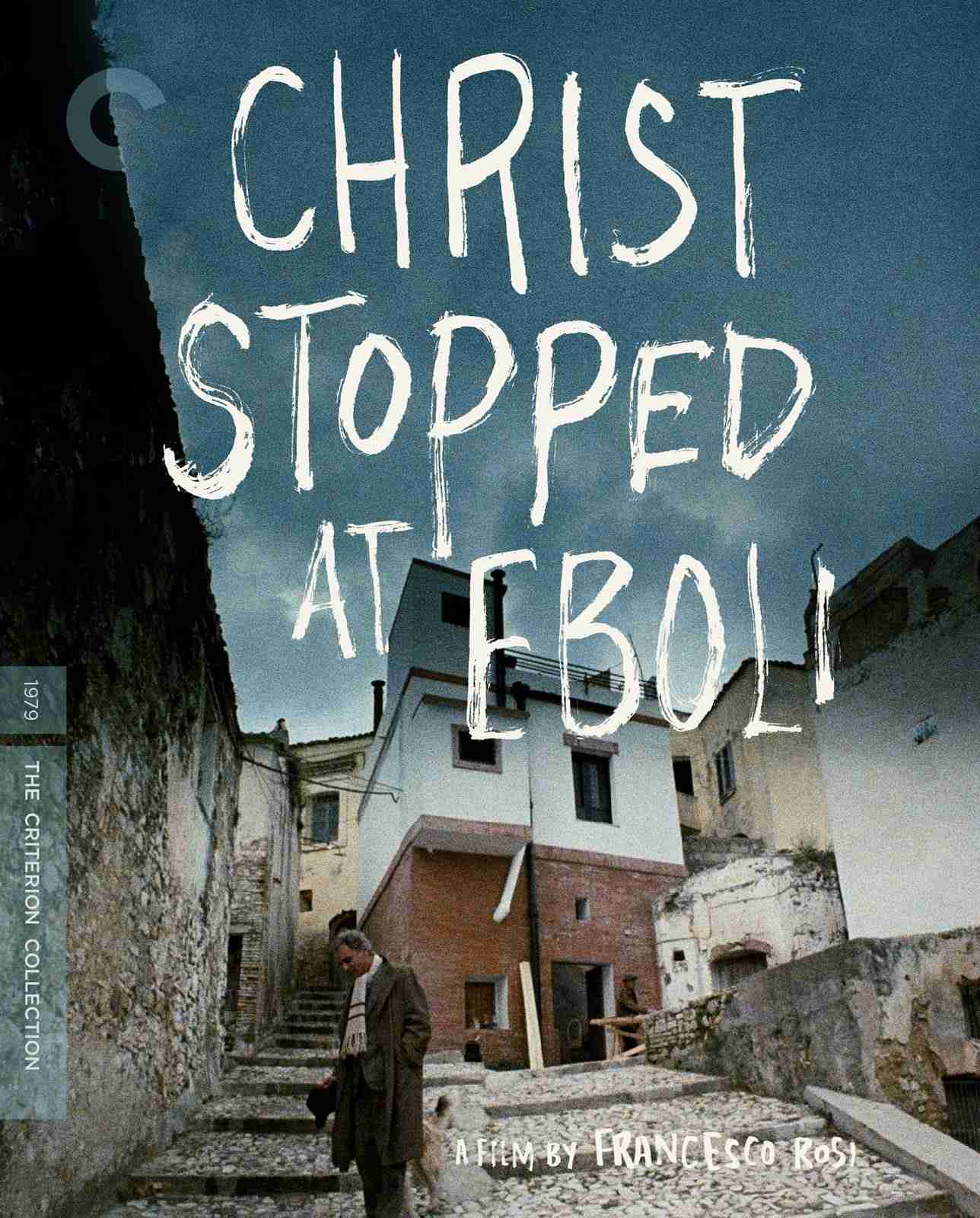 An elegy of exile and an epic immersion into the world of rural Italy during the Mussolini years, Francesco Rosi’s sublime adaptation of the memoirs of the painter, physician, and political activist Carlo Levi brings a monument of twentieth-century autobiography to the screen with quiet grace and solemn beauty. Banished to a desolate southern town for his anti-Fascist views, the worldly Levi (Gian Maria Volontè) discovers an Italy he never knew existed, a place where ancient folkways and superstitions still hold sway and that gradually transforms his understanding of both himself and his country. Presented for the first time on home video in its original full-length, four-part cut, Christ Stopped at Eboli ruminates profoundly on the political and philosophical rifts within Italian society—between north and south, tradition and modernity, fascism and freedom—and the essential humanity that transcends all.

• Excerpt from a 1974 documentary featuring Rosi and author Carlo Levi

• PLUS: A booklet featuring an essay by scholar Alexander Stille and a 1979 director’s statement by Rosi 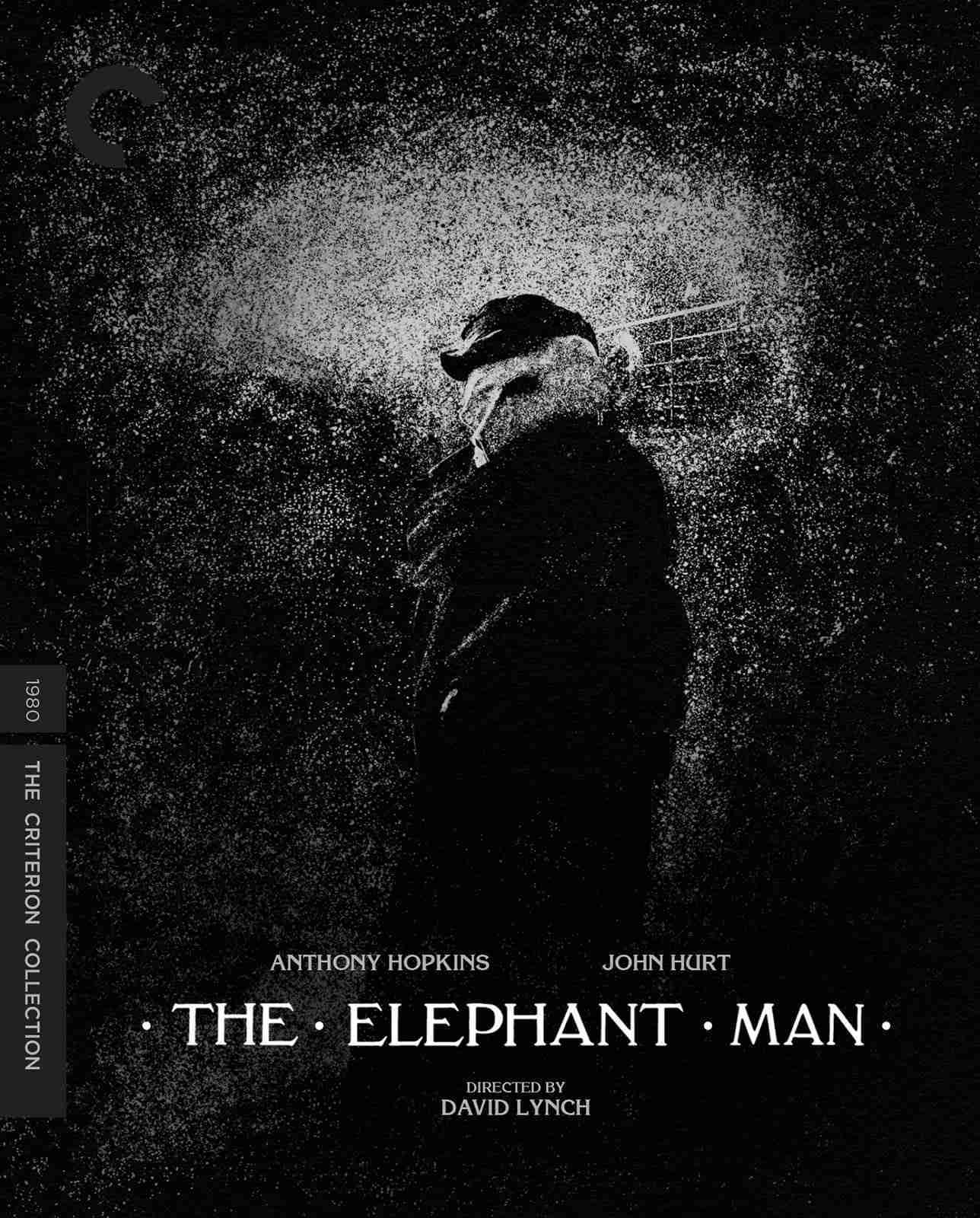 With this poignant second feature, David Lynch brought his atmospheric visual and sonic palette to a notorious true story set in Victorian England. When the London surgeon Frederick Treves (Anthony Hopkins) meets the freak-show performer John Merrick (John Hurt), who has severe skeletal and soft tissue deformities, he assumes that he must be intellectually disabled as well. As the two men spend more time together, though, Merrick reveals the intelligence, gentle nature, and profound sense of dignity that lie beneath his shocking appearance, and he and Treves develop a friendship. Shot in gorgeous black and white and boasting a stellar supporting cast that includes Anne Bancroft, John Gielgud, and Wendy Hiller, The Elephant Man was nominated for eight Academy Awards, cementing Lynch’s reputation as one of American cinema’s most visionary talents.

• Director David Lynch and critic Kristine McKenna reading from Room to Dream, a 2018 book they coauthored

• The Terrible Elephant Man Revealed, a 2001 documentary about the film

• PLUS: A booklet featuring excerpts from an interview with Lynch from the 2005 edition of filmmaker and writer Chris Rodley’s book Lynch on Lynch, and an 1886 letter to the editor of the London Times concerning Joseph Merrick, the “elephant man,” by Francis Culling Carr Gomm, chairman of the London Hospital at the time 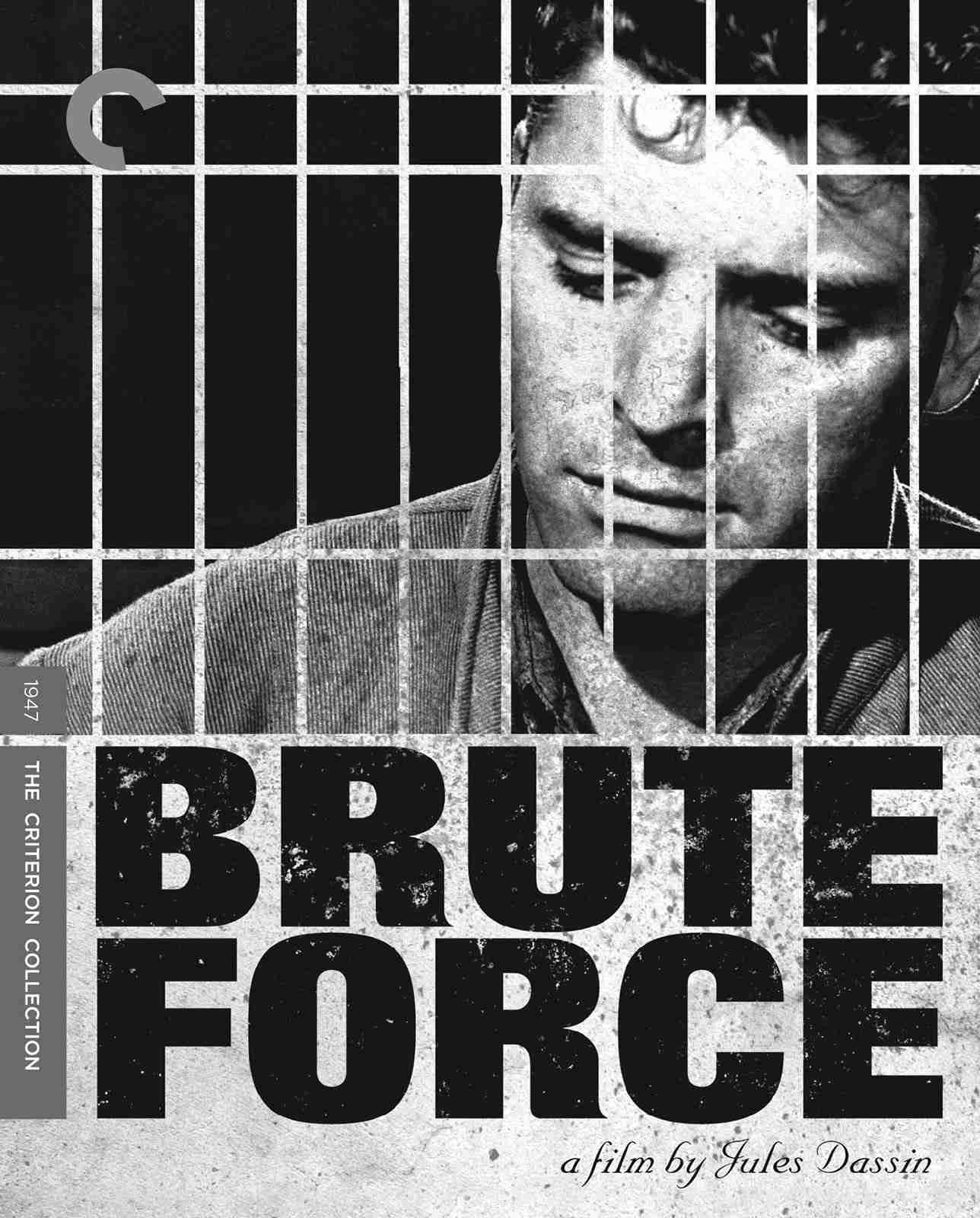 As hard-hitting as its title, Brute Force was one of Jules Dassin’s first forays into the crime genre, a prison melodrama with a scathing critique of the punitive American incarceration system at its heart. Burt Lancaster is the timeworn Joe Collins, who, along with his fellow inmates, lives under the heavy thumb of the sadistic, power-tripping guard Captain Munsey (Hume Cronyn). Only Collins’s dreams of escape keep him going, but how can he possibly bust out of Munsey’s chains? Matter-of-fact and ferocious, Brute Force builds to an explosive climax that shows the lengths men will go to when fighting for their freedom, and asks the question of who society’s real brutes are.

• Interview from 2007 with Paul Mason, editor of Captured by the Media: Prison Discourse in Popular Culture

• PLUS: An essay by film critic Michael Atkinson, a 1947 profile of producer Mark Hellinger, and rare correspondence between Hellinger and Production Code administrator Joseph Breen over the film’s content 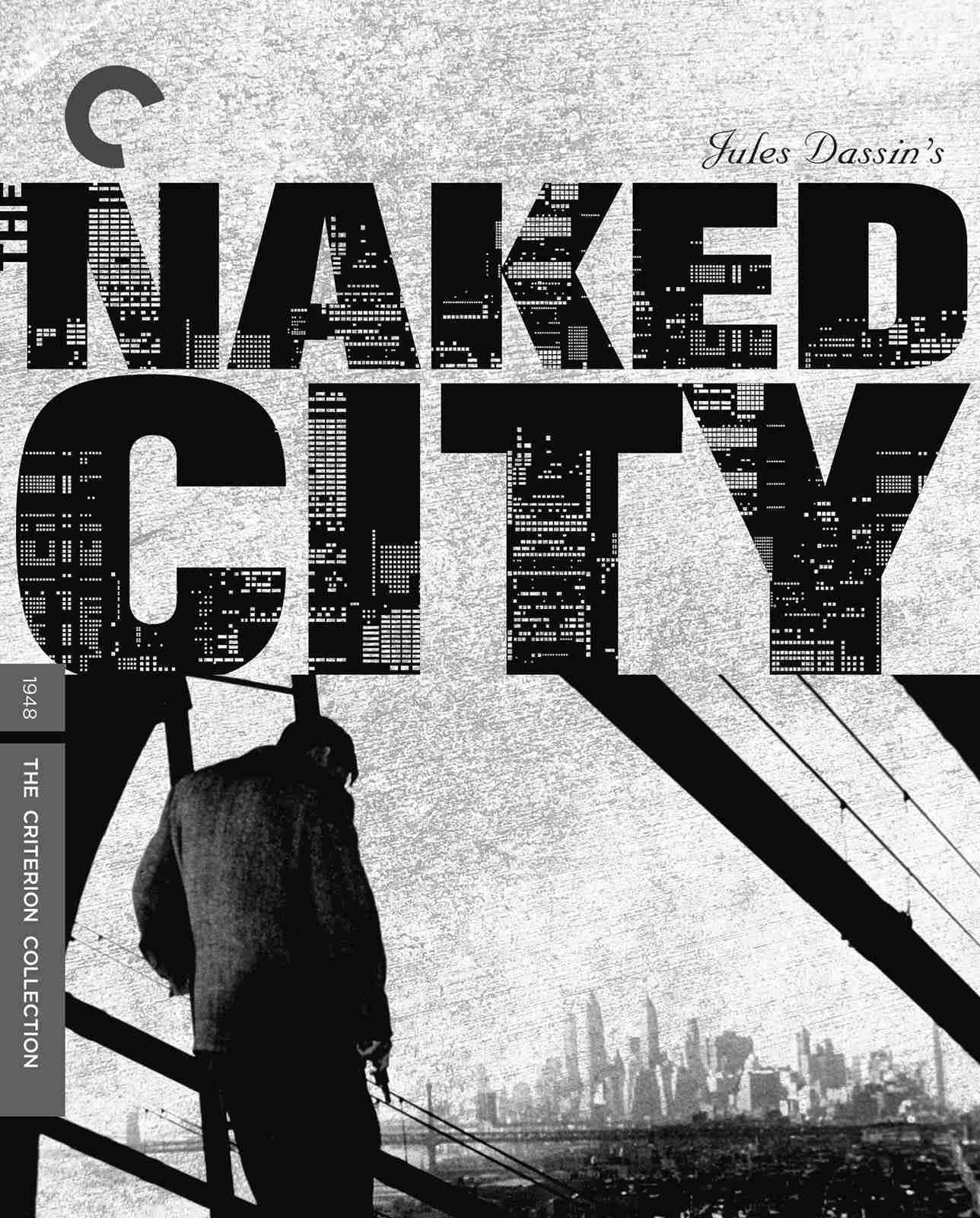 “There are eight million stories in the Naked City,” as the narrator immortally states at the close of this breathtakingly vivid film—and this is one of them. Master noir craftsman Jules Dassin and newspaperman-cum-producer Mark Hellinger’s dazzling police procedural, The Naked City, was shot entirely on location in New York. Influenced as much by Italian neorealism as it is by American crime fiction, this double Academy Award winner remains a benchmark for naturalism in noir, living and breathing in the promises and perils of the Big Apple, from its lowest depths to its highest skyscrapers.

• PLUS: An essay by author and critic Luc Sante and production notes from producer Mark Hellinger to Dassin 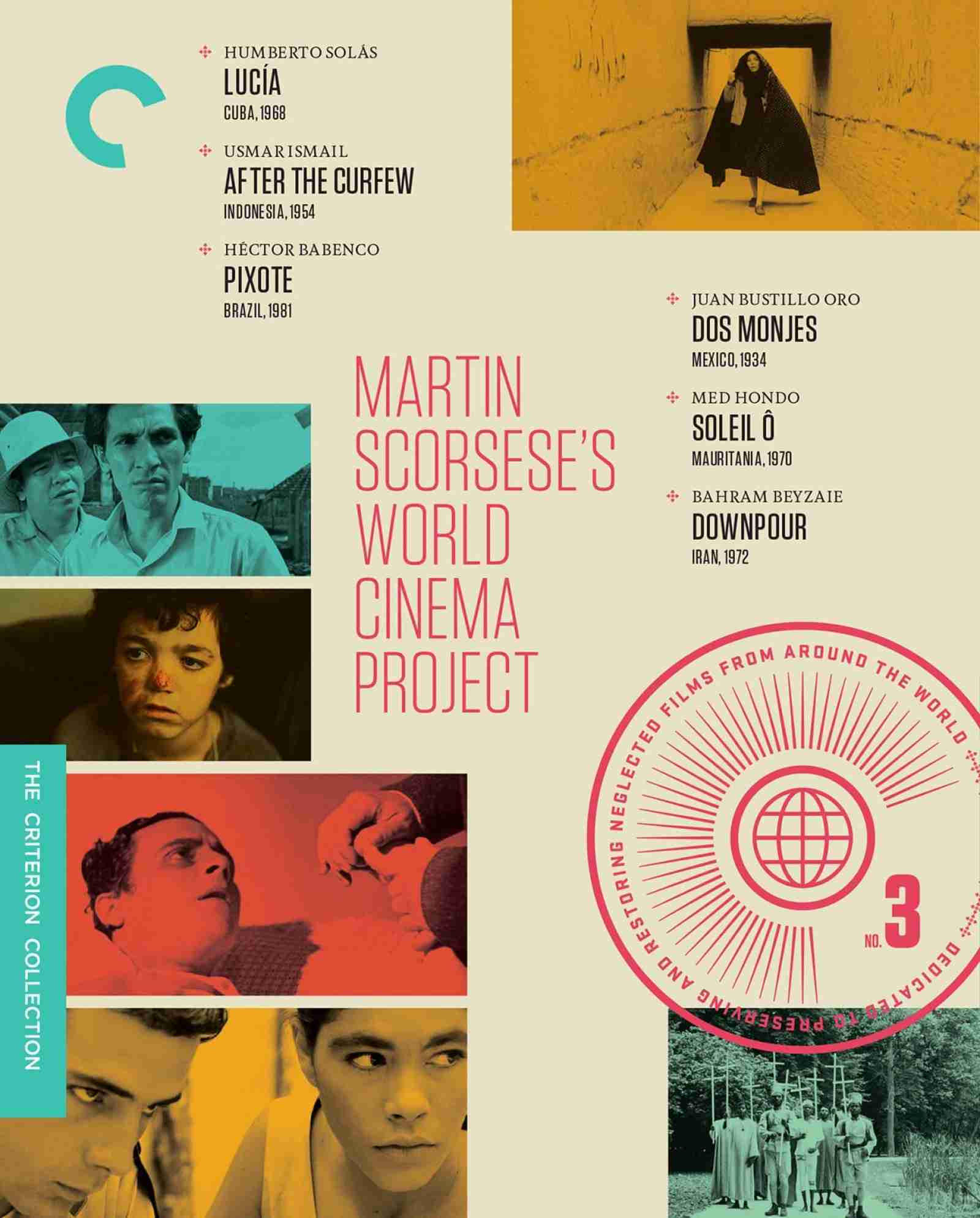 Established by Martin Scorsese in 2007, the World Cinema Project has maintained a fierce commitment to preserving and presenting masterpieces from around the globe, with a growing roster of more than three dozen restorations that have introduced moviegoers to often-overlooked areas of cinema history. Presenting passionate stories of revolution, identity, agency, forgiveness, and exclusion, this collector’s set gathers six of those important works, from Brazil (Pixote), Cuba (Lucía), Indonesia (After the Curfew), Iran (Downpour), Mauritania (Soleil Ô), and Mexico (Dos monjes). Each title is a pathbreaking contribution to the art form and a window onto a filmmaking tradition that international audiences previously had limited opportunities to experience.

• New, restored 4K digital transfers of all six films, overseen by the World Cinema Project in collaboration with the Cineteca di Bologna, with uncompressed monaural soundtracks on the Blu-rays

• Humberto & “Lucía,” a 2020 documentary by Carlos Barba Salva featuring Lucía director Humberto Solás and members of his cast and crew

• Prologue created by Babenco for the U.S. release of Pixote

• PLUS: A booklet featuring a foreword by Cecilia Cenciarelli, head of research and international projects for the Cineteca di Bologna, and essays by critics and scholars Stephanie Dennison, Dennis Lim, Elisa Lozano, Hamid Naficy, Adrian Jonathan Pasaribu, and Aboubakar Sanogo 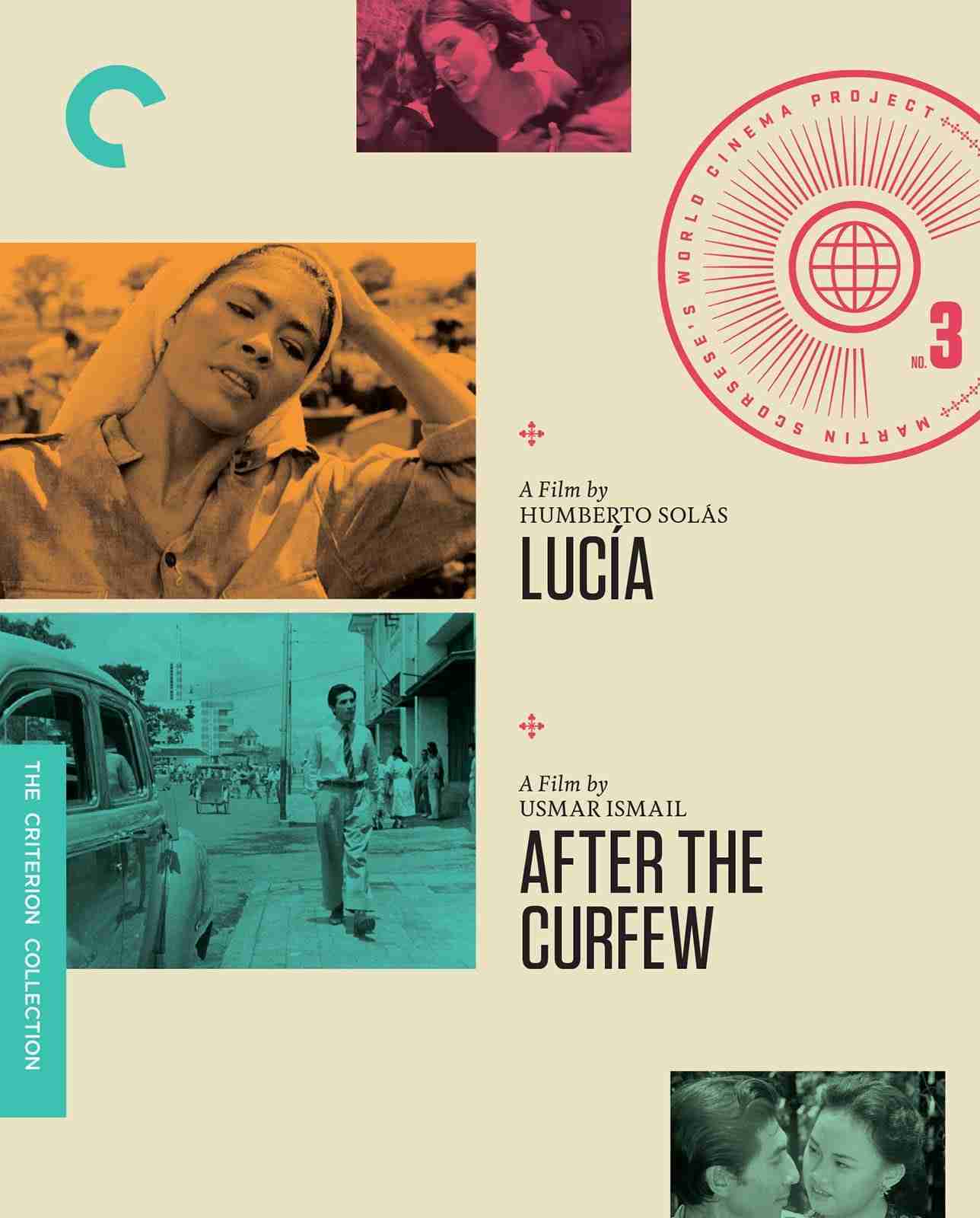 A breathtaking vision of Cuban revolutionary history wrought with white-hot intensity by Humberto Solás, this operatic epic tells the story of a changing country through the eyes of three women, each named Lucía. In 1895, she is a tragic noblewoman who inadvertently betrays her country for love during the war of independence. In 1932, she is the daughter of a bourgeois family drawn into the workers’ uprising against the dictatorship of Gerardo Machado. And in the postrevolutionary 1960s, she is a newlywed farm girl fighting against patriarchal oppression. A formally dazzling landmark of postcolonial cinema, Lucía is both a senses-stunning visual experience and a fiercely feminist portrait of a society journeying toward liberation.

This work by the trailblazing auteur Usmar Ismail struck Indonesian cinema like a bolt of lightning, illuminating on-screen, for the first time and with unflinching realism, the struggles of Indonesian society after the country gained its independence from the Netherlands. Giving voice to the frustrated dreams of a nation, After the Curfew follows the descent into disillusionment of Iskandar (A. N. Alcaff), a former freedom fighter who is unable to readjust to civilian life following the revolution that ended centuries of colonial rule. When he discovers that the ideals he fought for have been betrayed by a corrupt former commander, Iskandar is pushed to the breaking point. Steeped in the moody atmospherics and simmering psychological tension of film noir, this clear-eyed postcolonial tragedy paints a dark-edged portrait of a country no longer at war but still fighting for its soul. 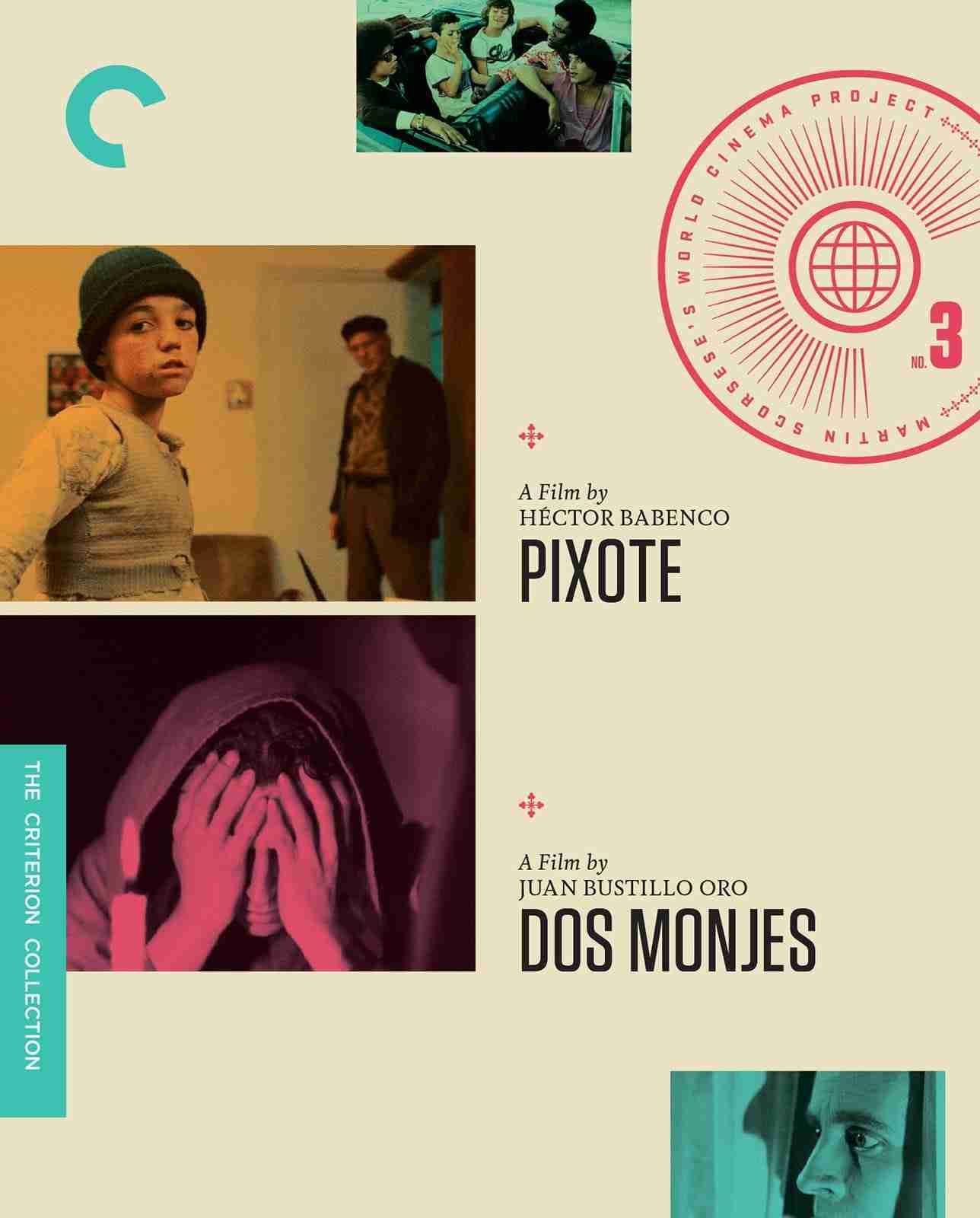 With its bracing blend of harsh realism and aching humanity, Héctor Babenco offers an electrifying look at lost youth fighting to survive on the bottom rung of Brazilian society that helped put the country’s cinema on the international map. Shot with documentary-like immediacy on the streets of São Paulo and Rio de Janeiro, Pixote follows the eponymous preteen runaway (the heartbreaking Fernando Ramos da Silva) as he escapes a nightmarish juvenile detention center, only to descend into a life of increasingly violent crime even as he finds himself part of a makeshift family of fellow outcasts. Balancing its shocking brutality with moments of disarming tenderness, this stunning journey through Brazil’s underworld is an unforgettable cry from the lower depths that has influenced multiple generations of American filmmakers, including Spike Lee, Harmony Korine, and the Safdie brothers.

Made in the early days of Mexican sound cinema, this vividly stylized melodrama hinges on an audacious, ahead-of-its-time flashback structure. When the ailing monk Javier recognizes a brother newly arrived at his cloister, he inexplicably becomes deranged and attacks him. What causes his madness? Director Juan Bustillo Oro recounts the two men’s shared past—a tragic rivalry over the love of a woman—twice, once from the point of view of each, heightening the contrasts between their accounts with visual flourishes drawn from the language of German expressionism. With its gothic sets, elaborate lighting, and daring camera work by avant-garde photographer Agustín Jiménez, Dos monjes is a broodingly intense outlier in Mexican cinema, plumbing the depths of psychological torment and existential mystery with experimental verve. 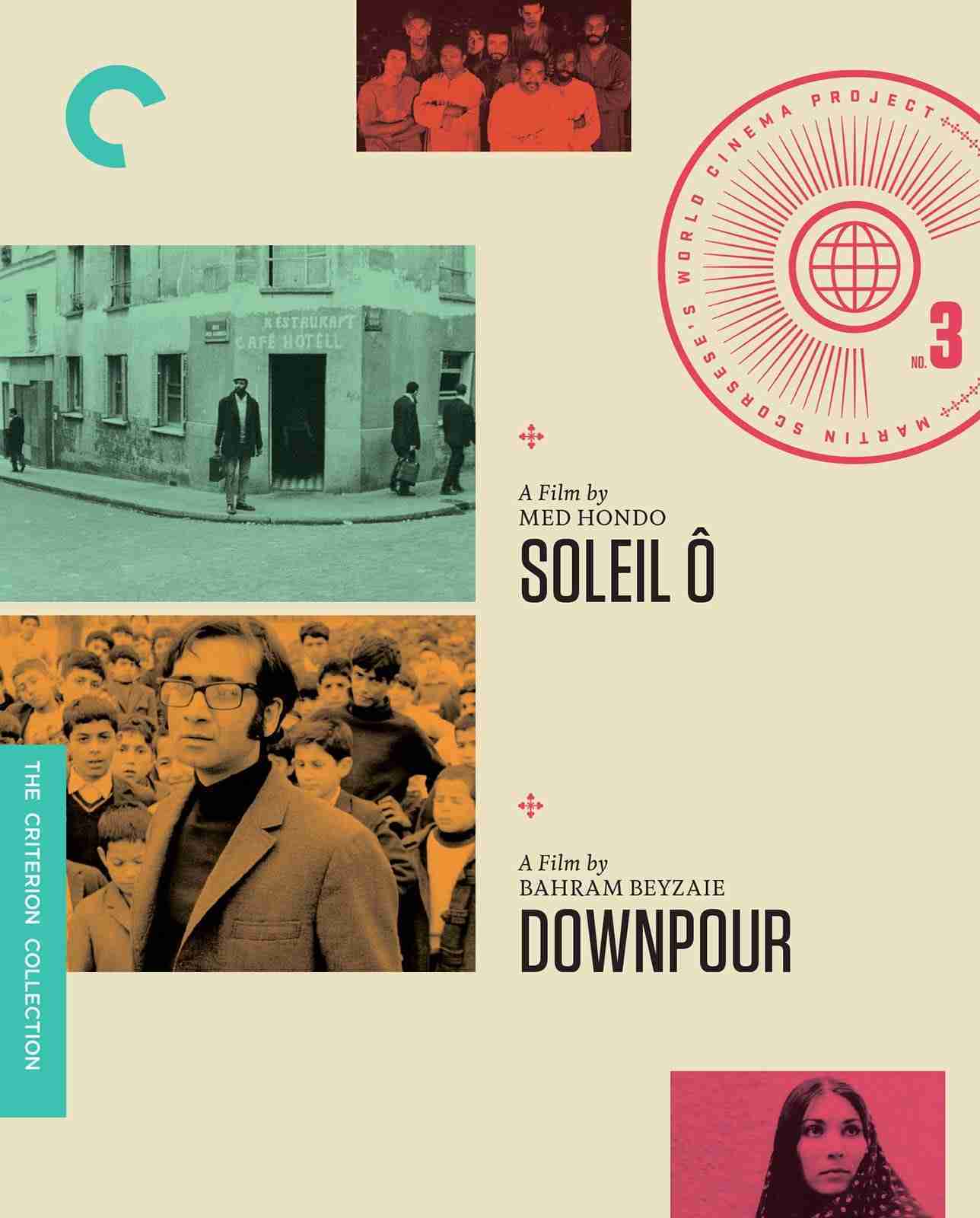 A furious cry of resistance against racist oppression, the debut from Mauritanian director Med Hondo is a bitterly funny, stylistically explosive attack on Western capitalism and the lingering legacy of colonialism. Laced with deadly irony and righteous anger, Soleil Ôfollows a starry-eyed immigrant (Robert Liensol) as he leaves West Africa and journeys to Paris in search of a job, a community, and intellectual engagement—but soon discovers a hostile society where his very presence engenders fear and resentment. Drawing on the freewheeling experimentation of the French New Wave, Hondo deploys a dizzying array of narrative and stylistic techniques—animation, docudrama, dream sequences, musical numbers, folklore, slapstick comedy, agitprop—to create a revolutionary landmark of political cinema and a shattering vision of awakening black consciousness.

Defined by a brash stylistic exuberance and a vivid way of looking at everyday life in prerevolution Iran, this first feature from the renowned Bahram Beyzaie helped usher in the Iranian New Wave. When he takes a job as a schoolteacher in a new neighborhood, the hapless intellectual Hekmati (Parviz Fannizadeh) finds that he is a fish out of water in a place where everybody’s business—including his tentative flirtation with an engaged seamstress (Parvaneh Massoumi)—is subject to the prying eyes of adults and children alike. Shot in luminous monochrome and edited with quicksilver invention, this touchstone work, which has been painstakingly restored from the only known surviving print, captures with puckish humor and great human tenderness the societal and intellectual conflicts coursing through Iran at a pivotal historical moment.