Interview – Taylor Dolan [The Phantom of the Opera] [The Folio Society]

THE PHANTOM OF THE OPERA

This year marked 110 years since Gaston Leroux’s landmark novel, The Phantom of the Opera, was first published as a serialisation in the French daily newspaper, Le Gaulois, and to commemorate the anniversary, The Folio Society has now released and lavish and visually arresting new edition of the much loved gothic classic.

To mark the release, we caught up with artist and illustrator Taylor Dolan to discuss her work on the new edition, the creative process and her career to date. 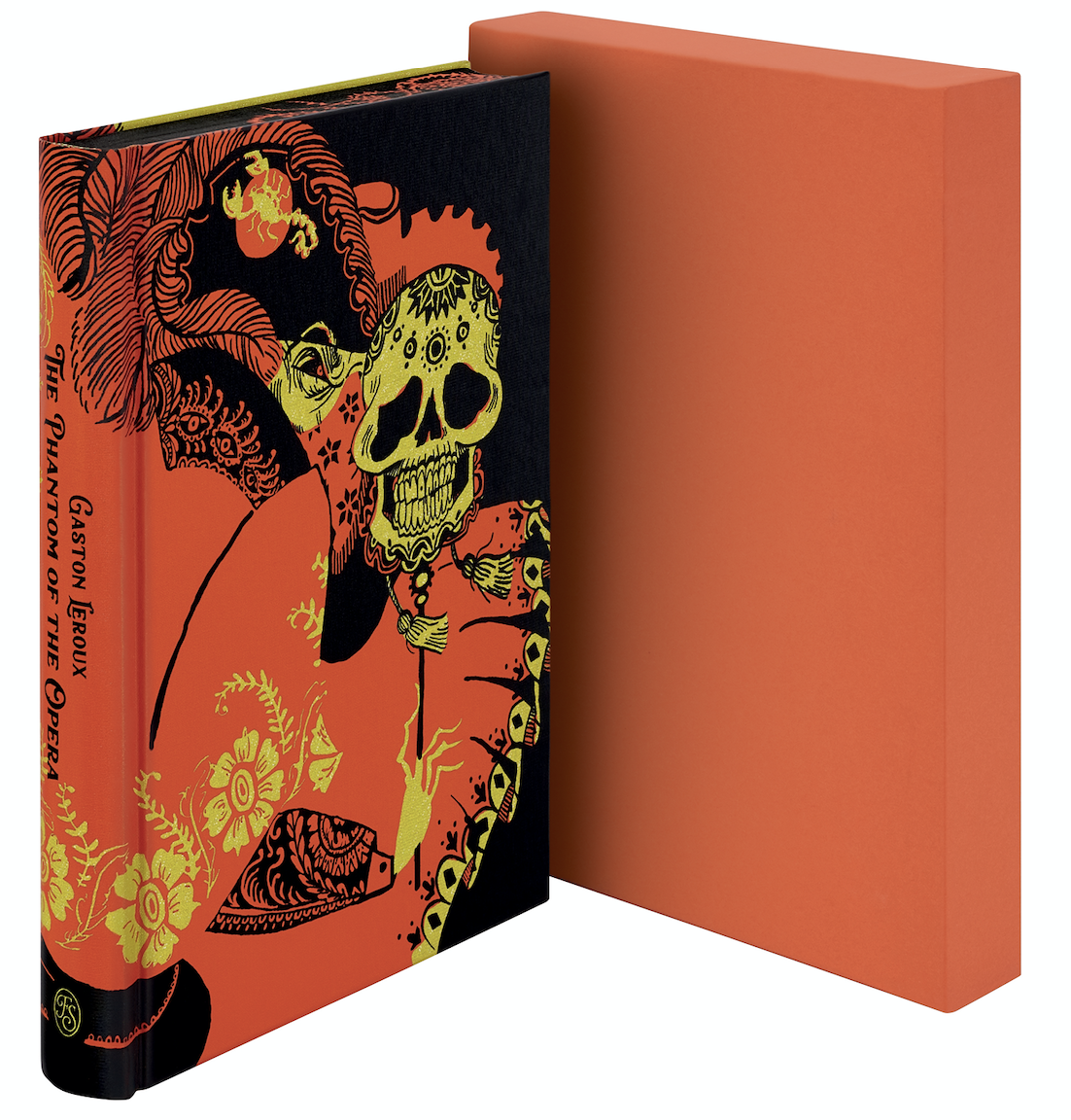 Tell us a little about your background? How did you get started in the industry?

I grew up doing theatre. For a long while, it was my everything. From the ages of 7-20, I performed in 3-4 shows a year with a full-time rehearsal schedule outside of my schoolwork. At the time, the theatre community was rife with body shaming. And so, when I was at the cusp of graduating high school and pursuing a degree in theatre, I realized how much of that shame I had internalised and decided to take a step back instead. I chose to go to a liberal arts university and take classes in every possible subject that I never had time to pursue because of my gruelling rehearsal schedules. I dove into classes on Greek mythology, French Literature, Ancient Chinese Pottery, Creative Writing. And, of course, in a tiny art program deep in the heart of Texas, I fell head-first into the joys of drawing.

This is a tricky one. I’m not sure if I believe most artists have an innate talent for art. For me, I discovered quite early on that I possessed a vivid imagination, and visual curiosity. Both of which are vital. But for any sort of talent I might possess? That is just a result of constant study and dissecting the work of artists my gut draws me to.

I tend to lean happily towards the macabre. All of my drawings start in thick dripping lines of black ink and go from there.

Our collaboration came about incredibly out of the blue. In 2017, I graduated from the Cambridge School of Art with my MA degree in Children’s Book Illustration. Each year, Pam Smy takes graduate work to the Bologna Children’s Book Fair, and for one week, presents us to the international publishing industry. At some point, during that week, my wonderful art director Raquel Leis Allion must’ve seen my work. She held onto me until a year later when The Phantom of the Opera slid onto her desk and put my name forward. I literally had no idea any of that was going on until I received an email from her late December of 2018 asking me if I had any possible interest in The Phantom of the Opera. 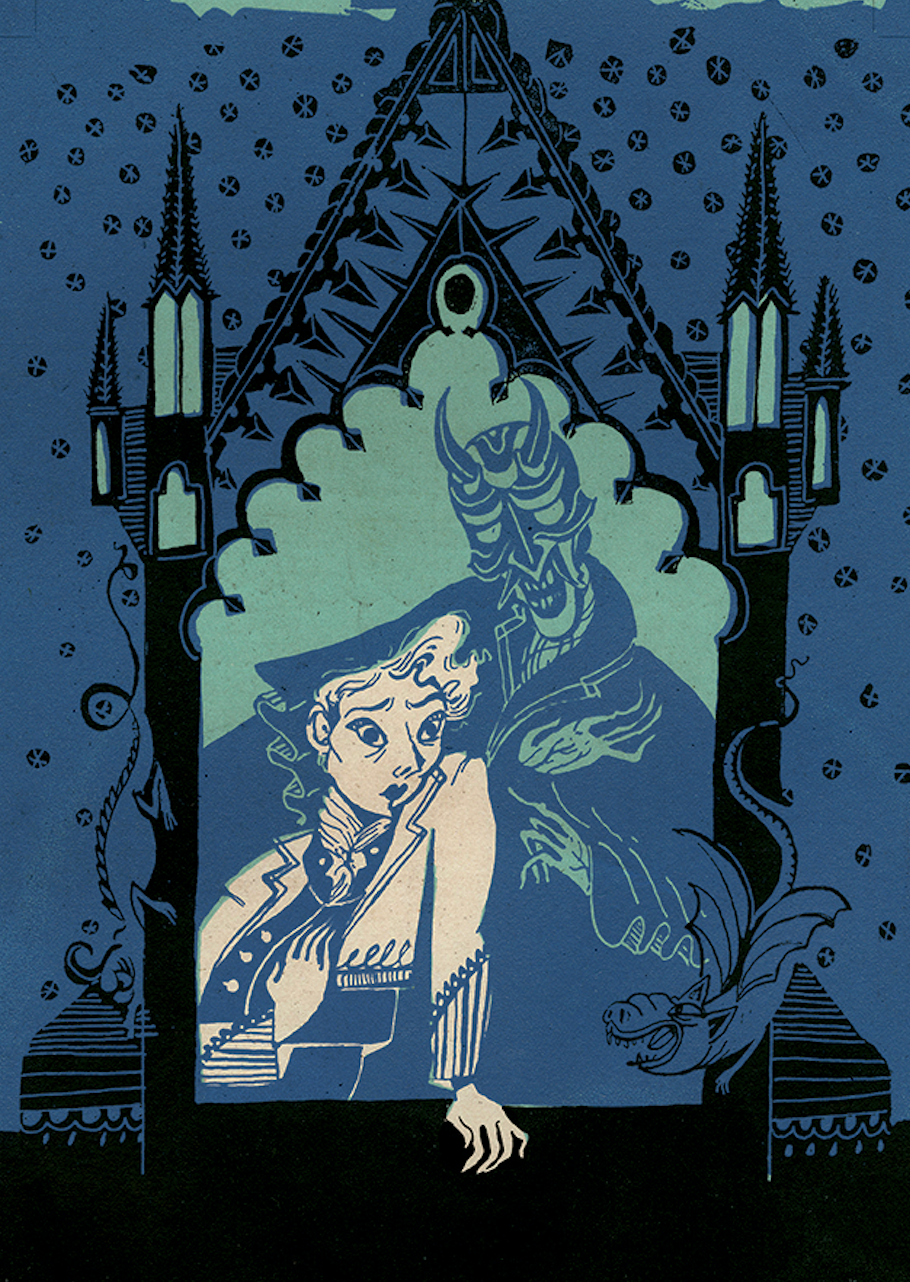 Had you read the novel before you began working on the project?

No, my first introduction was the musical. But once I was offered the chance to take on this amazingly melodramatic book, I read and annotated three different editions (two in English and one in French).

Many people will of course be more familiar with the musical than the novel itself. Did you take inspiration from the design work seen in the musical and film adaptations?

As a former theatre kid, before I was brought on as an illustrator, I had already seen the show twice live, memorised the original Broadway recording and watched the movie many times through. But in both the film and the production, the horror elements of the book are minimised, and the romance is more prominently displayed. In order to truly commit to the book version, I did everything in my power to start from scratch. Erik’s (the Phantom) mask, for example, has been made a famous symbol. Everyone knows that smooth, white half mask. A mask that is never described in the text. For my version, I imagined Erik looting the costume and prop departments to find a wide range of elegant alternatives. He is an extravagantly flamboyant character, so for one scene, I gave him an exaggerated traditional Japanese mask. The Hannya mask, in Noh theatre, represents the character of a female whose soul has been warped by jealousy and turned into a demon. It seemed more fitting to me.

How did you decide which parts of the novel to illustrate?

There is some technical business about spacing the full colour illustrations far enough apart that the binding process is simplified. That aside, the choices were purely selfish joy. I picked the scenes that were the most lurid and focused on characters deeply lost in emotion. This allowed me to really contort their bodies and enjoy the theatricality of the story.

Who would you say have been your main inspirations and influences?

Right now, I am absolutely in love with the 20th century European poster design. The designers like Josef Fenneker (Marmorhaus) and Adrien Barrère (Grand Guignol) made these wonderfully dark posters with thick lettering and twisted bodies to advertise the horror films and shows on display. They were the perfect launching point for The Phantom of the Opera. 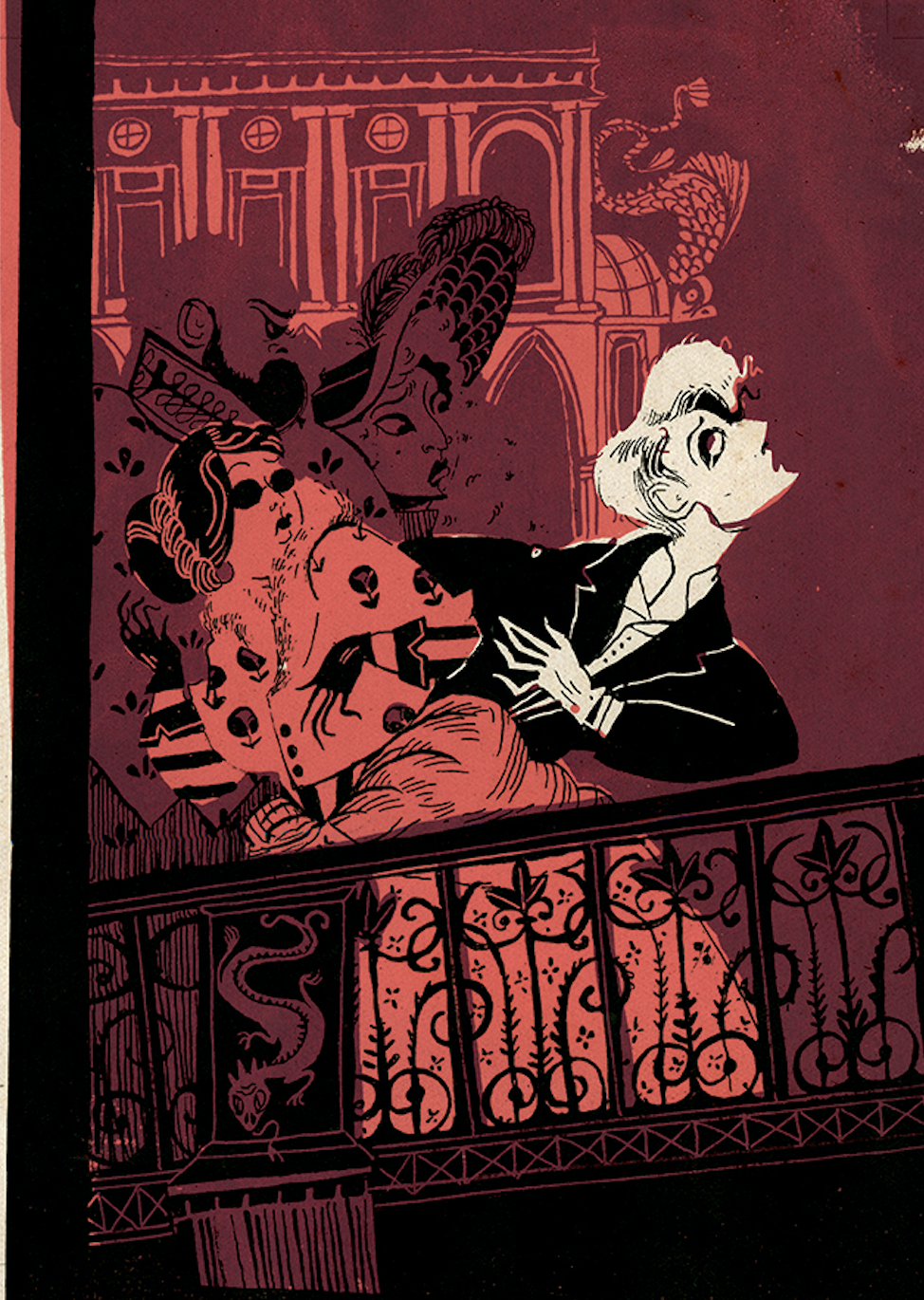 I struggle most with the short amount of time allocated to most illustration commissions. In my magical ideal world, where money doesn’t matter and deadlines only pop up when I want them too, I would have taken everything I learned from creating my illustrations for this project and started all over from the beginning. Often an illustrator has 2-3 months, if we are lucky, to build a whole visual language and complete a book. But with something like The Phantom of the Opera? I could have happily experimented and wallowed in its pages for a couple of years.

What have been your favourite projects to date?

It’s a tie between The Phantom of the Opera and Ghoul Scouts: Welcome to Camp Croak – a middle-grade fiction series I am writing and illustrating with Guppy Books about a girl scout troop of the undead wreaking havoc and have a ball in the swamps of Louisiana.

Keep sketchbooks and draw every single day. They don’t have to be pretty, and you don’t have to show anyone, but you do have to be constantly playing with ideas and techniques. It’s the most essential part of building up your library of visual references.

The Folio Society edition of Gaston Leroux’s The Phantom of the Opera, translation by David Coward with an introduction by Simon Callow and illustrations by Taylor Dolan, is available exclusively from www.FolioSociety.com