Flicker Alley to release ‘CHILDREN OF DIVORCE’ in a world premiere Dual Format Edition on 6 December, 2016

Flicker Alley, in association with the Blackhawk Films® Collection, proudly presents a newly-restored edition of CHILDREN OF DIVORCE, marking the film’s long-awaited world premiere on Blu-ray and DVD.

Almost 15 years after the release of its first publication, Flicker Alley, in partnership with the Blackhawk Films® Collection, is proud to celebrate 50 fully-published titles with the Blu-ray/DVD world premiere of Children of Divorce, starring Clara Bow and Gary Cooper.

The film begins in an American “divorce colony” in Paris after the First World War, where parents would leave their children for months at a time. Jean, Kitty, and Ted meet there as children and become fast friends. Years later, in America, when wealthy Ted (Gary Cooper) reconnects with Jean (Esther Ralston), the two fall deeply in love, vowing to fulfill a childhood promise to one day marry each other. But true love and the most innocent of plans are no match for the scheming Kitty-played by the original Hollywood “It” girl, Clara Bow-who targets Ted for his fortune. After a night of drunken revelry, Ted wakes up to find he has unwittingly married Kitty. This unfortunate turn of events, however, carries with it the traumatized pasts of the three players, whose views of marriage have been shaped as children of divorce.

Sourced from the original nitrate negative held by the Library of Congress, as well as their 1969 fine grain master, this new restoration of Children of Divorce was scanned in 4K resolution, and represents over 200 hours of laboratory work by the Library of Congress in order to create the best version possible. Though some deterioration remains, this is the first time the film has ever been released on home video, allowing audiences to enjoy a rare viewing of classic performances from two of early cinema’s most recognizable stars.

Flicker Alley is delighted to reach the milestone of its 50th publication with Children of Divorce. This Blu-ray/DVD dual-format edition features a new score by the Mont Alto Motion Picture Orchestra, and was made possible thanks to the Blackhawk Films® Collection, Paramount Pictures, and the Library of Congress. 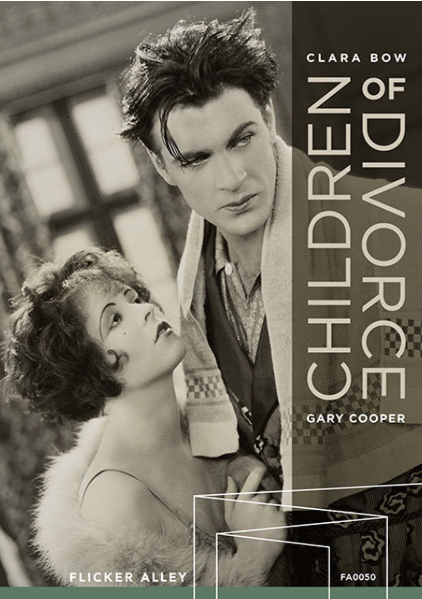 “Clara Bow: Discovering the ‘It’ Girl” – Narrated by Courtney Love, this hour-long film documents the life of the woman who would become the icon of the flapper era, from her tragic childhood to her tumultuous personal life as Hollywood’s first sex symbol.

Souvenir Booklet – Featuring rare photographs; an essay by film preservationist and Clara Bow biographer David Stenn; notes on the production of the documentary by producer-director Hugh Munro Neely; and a brief write-up about the music by Rodney Sauer, score compiler and director of the Mont Alto Motion Picture Orchestra.

For more information, and to pre-order your copy, please Click Here.