Out now on Blu-ray & DVD

Following the global success of Olympus Has Fallen, Mike Banning is back and he’s bringing his Presidential bromance to Blighty as LONDON HAS FALLEN explodes onto Blu-ray & DVD courtesy of Lionsgate Home Entertainment. 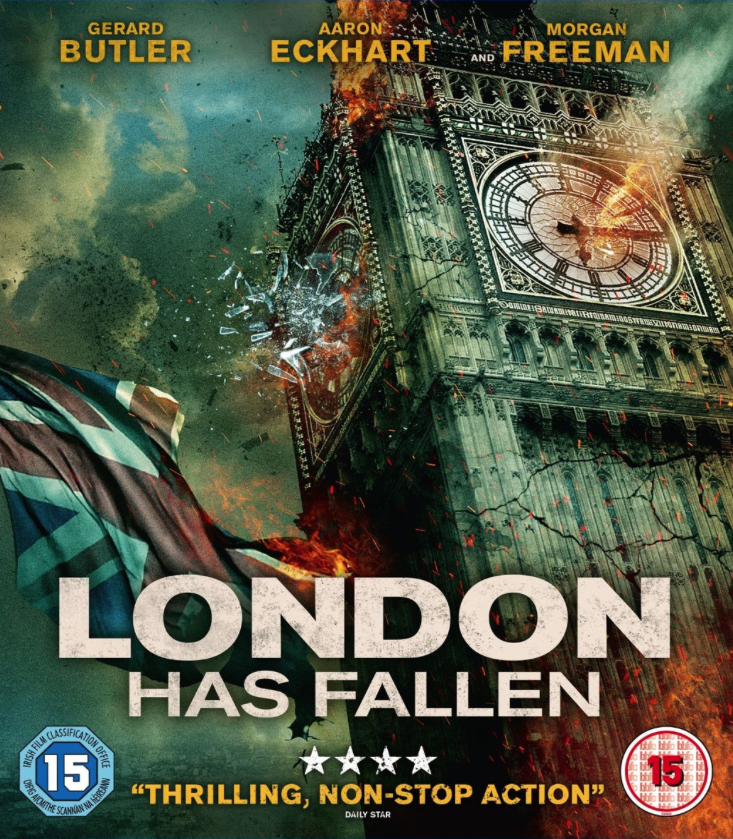 Another year, another city, another threat to President Benjamin Asher’s life… When a terrifying plot comes to light during a State Visit to London, Secret Service muscle and all-round tough guy Mike Banning must once again do whatever it takes to rescue his beloved POTUS – and the free world. On foreign turf and with seemingly no-one he can rely on (save for a feisty MI6 agent), the odds are stacked against Banning, with even President Asher forced to step up and help save the day…

Following an outstanding performance at the box office, Gerard Butler (Machine Gun Preacher, Law Abiding Citizen), Aaron Eckhart (The Dark Knight, Thank You For Smoking), Angela Bassett (TV’s American Horror Story, This Means War) and Morgan Freeman (Now You See Me 2, Momentum) bring LONDON HAS FALLEN home this summer – an explosive, fun-filled adrenaline ride and the perfect antidote to whatever the weather throws at you!

The Do’s and Don’ts of Hosting a World Leader…

In London Has Fallen our favourite fictional POTUS Benjamin Asher (Aaron Eckhart) and his hardcore security head, Mike Banning (Gerard Butler), are back in action. Yet again, the duo must save the world from imminent global destruction – but this time with a side of tea and crumpets, and a possible visit with the Queen of England…

It all begins when the sudden death of British Prime Minister, James Wilson, brings leaders from all over the world to London to attend the PM’s funeral. However, after a few mysterious explosions within hours of various leaders’ arrivals, it becomes clear there is an ulterior motive at the root of this convening of leaders.

This got us thinking about what it takes to get a world leader anywhere, let alone to another country, safely and comfortably. To celebrate President Asher’s return to the screen and jump across the pond in London Has Fallen, here is a list of Do’s and Don’ts to keep in mind when hosting a world leader in your home country.

DO let them arrange their own travel:

In the event that a world leader does not prefer air travel, he may elect to use his own luxury train. Such was the case with late North Korean leader Kim Jong-Il, who took ten days to travel to a conference in Moscow. Security covered the entirety of the 6,200 mile track travelled by the 21 carriage bullet proof train. While in transit, Jon-Il dined on such delicacies as roast donkey, and lobster.

After a month of planning for the Queen’s visit to France for D-Day landing commemorations in 2014, French President Francois Hollande switched the vehicle chosen for the Queen’s use from an armoured Citroen CX (his own car of choice) to a armoured Renault Vel Satis when he realised the roof of the car might be too low to accommodate her preference for wearing hats.

DO expect them to come with some serious baggage

On a visit to London, Russian president Vladimir Putin brought along a 13 strong motorcade including two bullet-proof Russian Zil Limousines and a Mercedes.

That doesn’t even compare to the cargo in tow for Obama’s African tour in 2013. The presidential team was equipped with 56 support vehicles, 14 limousines, including the president’s trusty bullet-proof Cadillac, and more trucks loaded with bullet-proof glass to cover the windows of every hotel room occupied by the President.

Finding the bed at one of the chosen hotels for President George W. Bush’s trip to Nigeria in 2008 unsuitable for the President, the presidential camp elected to instead fly a bed over for the younger Bush, complete with headboard, pillows and linen. After all, when sleep is so vital for our leaders, why risk them losing it over a bad bed?

DO expect them to travel with an official taster, personal chef, and possibly their own food

Like many historical kings, Russian President Vladimir Putin brings an official taster wherever he goes to test for poison. Alternately, President Obama prefers to bring his own chef and food along with him. Additionally, any food prepared for Obama outside the White House is always overseen by a Navy official.

DO expect a well thought out gift

On former Secretary of State Hilary Clinton’s 2009 visit to Moscow, the former First Lady and Democratic presidential candidate for the 2016 US election handed Russian Minister of Foreign Affairs, Sergey Lavrov, a cartoon-looking red button with the word “reset” on it as a peace offering in hopes of settling past tensions between the US and Russia. Unfortunately, whomever set the language for the button made an error in translation. Instead of “reset,” the button read “overloaded.” Needless to say, the message of a good housewarming gift is always an important thing to consider.

If you are hosting a POTUS, DO make sure you have ESPN and a well equipped gym

President Bush and Obama may not agree on everything, but both presidents concur when it comes to travel priorities; two essentials are ESPN (the US sports channel), and a gym. Something tells me President Asher would agree with that as well.

LONDON HAS FALLEN is out now on Blu-ray & DVD from Lionsgate Home Entertainment.

To celebrate, we have 3 x Blu-ray copies of the film to give away courtesy of our friends at Lionsgate Home Entertainment.

To enter, fill out the following form with ‘London’ in the subject line, including your full name, address and contact number.

Please Note: You must be following @TheArtsShelf on Twitter to be eligible to win. Twitter username must be included in the entry form.