The Folio Society is proud to announce that all three artists shortlisted in the Book Illustration category at this year’s V&A Illustration Awards have been nominated for their work on Folio editions.

This is the first time that a single publisher has received more than one nomination within any category.

The three titles are: 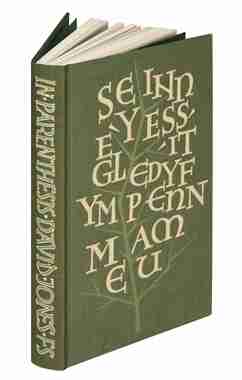 In Parenthesis by David Jones, with calligraphic illustrations by Ewan Clayton.

In Parenthesis tells, in the slang-vernacular of ordinary soldiers, the story of Private John Ball and his comrades as they travel from England to the Front, a journey that culminates in the assault on Mametz Wood in the Battle of the Somme in July 1916.

Through his characters, Jones shares with us his own experiences, but he also harkens back to a time before his own – to the remote, shared heritage held by ancient myth.

And so parade-ground oaths are fused with moments of mythic beauty, influenced by Arthurian legend, Shakespeare, The Song of Roland and notably the 6th-century epic Y Gododdin, which commemorates a doomed raid by Welsh soldiers into English border country.

Life, the Universe and Everything by Douglas Adams, illustrated by Jonathan Burton.

Stranded in a damp cave on prehistoric Earth (specifically, what will one day be Islington), Arthur Dent is suddenly hurled through an eddy in the space–time continuum.

He lands, with Ford Prefect and a sofa, on Lords Cricket Ground – swiftly followed by a gang of robots who steal the Ashes before departing.

From thereon in, things only become more complicated as we encounter Arthur’s nemesis, Agrajag, the unhappily immortal Wowbagger the Infinitely Prolonged, and the people of Krikkit, ‘a bunch of sweet guys … who just happen to want to kill everybody’.

‘I remember him as if it were yesterday, as he came plodding to the inn door, his sea-chest following behind him in a handbarrow.’

Young Jim Hawkins is at once terrified and captivated by the rum-soaked sea-dog who takes up lodgings at his father’s inn, the Admiral Benbow.

But after discovering a treasure map in the sailor’s trunk, Jim embarks on a perilous journey of treachery, heroism and piracy aboard the ship Hispaniola. 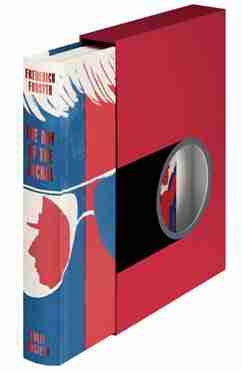 In addition, the Folio Society edition of Frederick Forsyth’s The Day of the Jackal has been nominated in the Book Cover category, thanks to Tatsuro Kiuchi’s striking design.

The winners will be announced at a ceremony held on 18 May.

Sheri Gee, Art Director at The Folio Society was delighted by the news, saying:

‘We are proud to commission many of the world’s best illustrators and each of the artists thoroughly deserves this recognition of their outstanding work on our titles.’